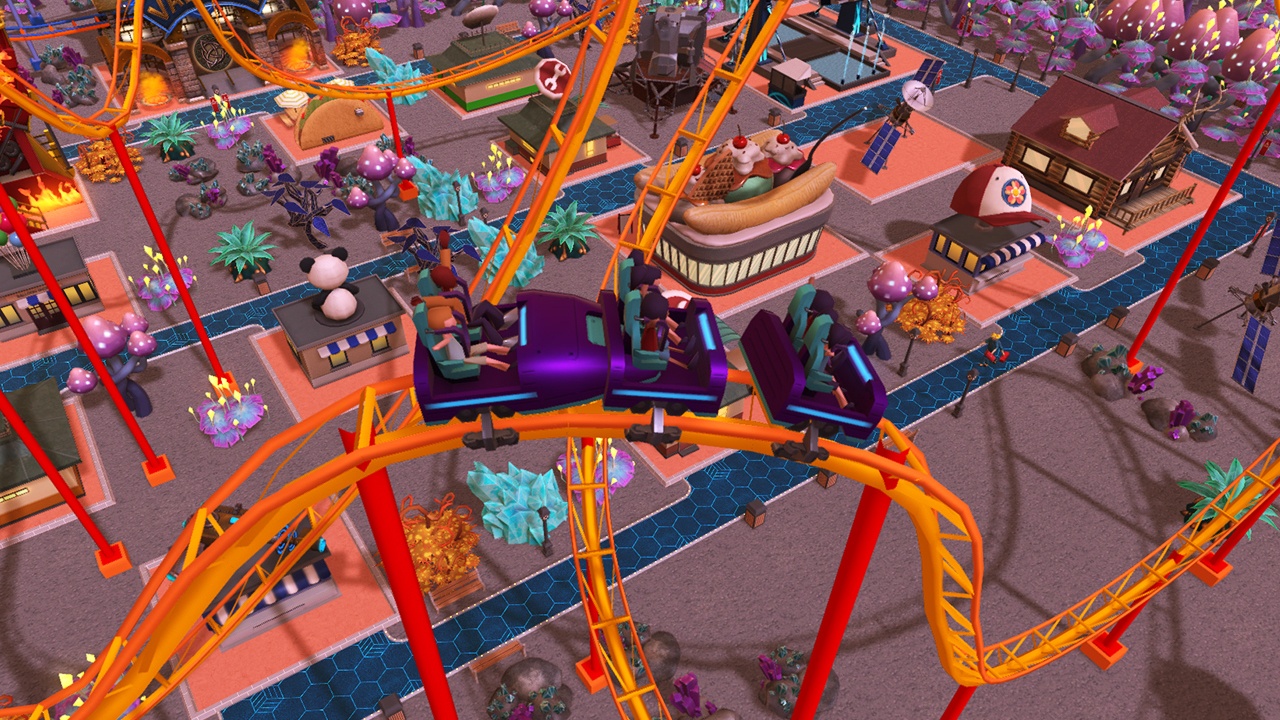 It has become super cliched to say a game is “perfect” for the Nintendo Switch. It’s a silly thing to say, because what game wouldn’t be? Ideally, every great game ever makes its way onto the portable and home console hybrid.

Still, we’re going to say it anyway. On paper, a portable version of the timeless park management sim classic would be so awesome to have with you wherever you are. Paper is the only place though where that dream actually lives up to its potential.

While Roller Coaster Tycoon Adventures isn’t a disaster, it also fails to meet a few benchmarks which would have helped the game have more wide spread appeal.

Other than being a part of the Classic remake from 2016, there’s nothing linking the original creator, Chris Sawyer, to the franchise anymore.

Recent games in the series have been up and down, and sometimes panned. Making matters worse, Adventures was birthed out of some strange circumstances.

I’m happy to report, then, that Roller Coaster Tycoon Adventures is not the hot garbage that one equipped with all that information would probably assume.

Adventures has a perfectly sound foundation, and is especially effective as an entry point to the genre for newcomers or younger players.

There are three different games modes to choose from: Adventure, Scenario, and Sandbox. Adventure is essentially your standard build up a park mode with some light choices and story elements thrown in. It’s not Mass Effect, though, that’s for sure.

Scenario should be familiar to veterans. You’re handed a park and you have set of specific goals – such as reaching a park rating level – that you must hit in a certain amount of time.

Sandbox gives you the keys to the car and lets you build whatever park you want with little restrictions, or none if you prefer. Go HAM with unlimited money and everything unlocked from the start if you want.

Functionally, all of the game modes are fine, but the issue is the gameplay itself. While it’s inviting to newcomers, it’s too easy and basic for hardcore veterans.

Creating a well-functioning park is very easy to do. The game is simplified to the point where you don’t really need to put much effort or thought into things like guest mood, ticket prices, or where you put utilities – such as Janitors – in the park.

Anything that’s deficient is clearly telegraphed to the player. If prices are too low or high, the game will tell you. Just simply adjust it until the game tells you that it’s just right. There’s no trial and error needed.

You can’t customize worker’s routes, either. You simply place the hub for each employee such as your mechanic down on your park, and the game will tell you how much area it will safely cover.

If parts of the park aren’t covered, simply just make another one. It’s clearly marked as such in-game.

Across the bottom of the screen, you have a real-time tracker that tells you how effective your park is at delivering on the game’s most important factors like satisfaction with rides and utilities. If you see it going down, simply add higher quality stuff.

The game is just very easy to play, and doesn’t require a whole lot of thought other than how you want to lay your park out.

Scenario mode is where Roller Coaster Tycoon Adventures could have gotten creative, but the challenges are all extremely straight forward unfortunately. If you know the basics of the game, you can streamline your park to easily clear them.

While the game lacks challenge that it sorely needs, creating your park works surprisingly great with the Switch’s controls. It’s very easy to design coasters and place your rides, shops, paths, and decorations.

You have a ton of space to work with in Sandbox mode especially, and you have whatever you need to make some very elaborate and huge parks.

Although it’s not all that challenging to accomplish, the satisfying feeling of watching your park grow, expand, and fill up is still present in Roller Coaster Tycoon Adventures and for some fans, that will be enough.

There is plenty of researchable rides, coasters, games, and shops, along with some theme options like Western or Outer Space to give your park some flair.

Unfortunately though, the themes are kind of limited to the classics, and you can’t test ride any of your coasters or other attractions.

Ultimately, the lack of complexity holds Roller Coaster Tycoon Adventures back. With some more time and effort, it could have been the hardcore park management sim that consoles desperately need, with the added benefit of being portable, too.

Instead, it’s regulated to being a game that’s best suited for kids or adults looking to pass the time on a plane ride or road trip.

Roller Coaster Tycoon Adventures lacks the replay value and challenge to have much worth outside those two scenarios, especially when compared to modern competition like Planet Coaster and Parkitect.

Still, thanks to being portable, it does at least have a niche and that is this game’s saving grace.