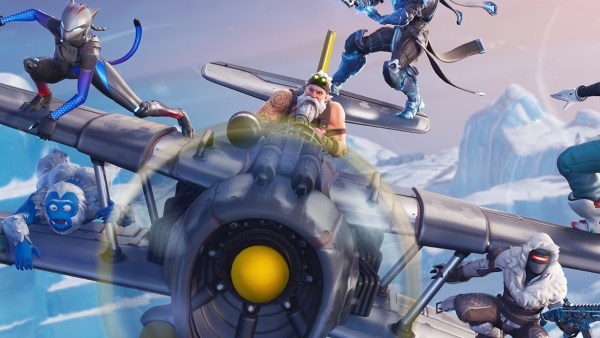 Epic Games revealed the patch notes for the 7.0 update of Fortnite, adding new content for both Battle Royale and Save the World modes.

The biggest change in the update is the map in Battle Royale with snow covering the ground alongside several new locations added, such as Frosty Flights, Polar Peak, and Happy Hamlet. An iceberg and “Expedition Outposts” also appear on the map and contain ziplines that allow players to still aim, shoot, and use items while traveling from one end to another.

A usable airplane called the X-4 Stormwing Plane has also been added to Battle Royale and can seat up to five players, four on the wings and one pilot. The new vehicle has a mounted machine gun that can overheat, while the piloting player can boost, airbrake, and do barrel rolls.

Other changes include reworking Balloons so players can use weapons and items while floating, adding filtering to the item locker, and performance features for mobile. The update also vaulted several items: Shadow Stones, Port-a-Fort, Chiller, Clinger, Double Barrel Shotgun, and the Shockwave Grenade.

Battle Royale’s Season 7 begins alongside the 7.0 update with a new battle pass containing new cosmetic items, such as “wraps” that can change the appearance of weapons and vehicles. Battle pass owners will also gain access to the upcoming Creative mode to create games on a private island when it launches on Dec. 13.

Announced earlier this week, the Save the World mode adds Act 3 of the Canny Valley questline with 20 new quests and two new landmark zones. Despite the patch notes promising “a dramatic conclusion” to the campaign, Epic also notes that the finale is an “early, work-in-progress version” with an ending song and video to be added “at a later date.”

The 7.0 update also adds several heroes and weapons only found in past limited-time events to the regular Loot Llama. Check out the patch notes for the full list of changes and bug fixes.