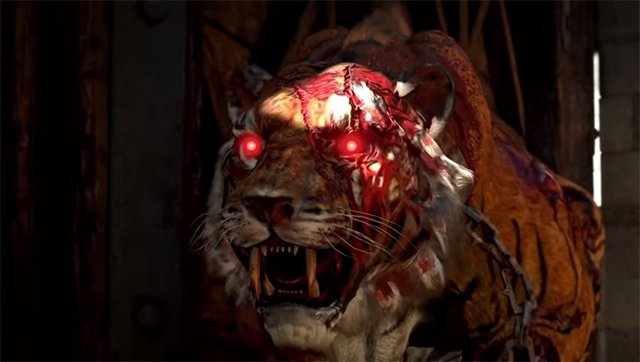 How to Kill a Zombie Tiger with a Brain Rotted Tiger in IX in Black Ops 4 Zombies (Here Kitty, Kitty Trophy and Achievement)

Looking to get the platinum trophy or full 1000 Gamerscore for Treyarch’s Call of Duty: Black Ops 4? Then you’ll need to get the Here Kitty, Kitty trophy or achievement. To do this, you’ll need to ‘Kill a Zombie Tiger with a Brain Rotted Tiger‘ on the map IX. So here’s exactly how you can do that.

For the Here Kitty, Kitty trophy or achievement in Black Ops 4, you’ll first need to make sure you’re playing on the IX map.

There are a number of things you need to do in order to kill a Zombie Tiger with a Brain Rotted Tiger, but it’s actually quite simple when you know how.

For a short and simple run-through of the steps, you can check out our quick bullet-pointed list below. We’ve also provided more detailed steps, should you need a bit more guidance.

We’ll run you through each of the different steps in a bit more detail below.

How to Unlock Pack-a-Punch on IX

Before you can get the Brain Rotter ammo you need to turn a tiger against its fellow feline friends, you’ll need to unlock the Pack-a-Punch machine in IX.

This is done by heading to the following different locations, pressing Square on PS4 or X on Xbox One to activate the gong, and then defeating the ‘Champion’ enemy that appears. These tend to take a fair few shots to drop, but keep your distance and focus your fire on their heads.

By defeating each of the Champions on IX, they’ll drop a zombie head. Once you’ve collected all four of these heads, you want to head to The Temple and place the heads on the spikes. Once all four are placed on the spikes, you’ll have unlocked the Pack-a-Punch.

We’ve got a full breakdown of how to reach each of these different rooms in IX and how to unlock Pack-a-Punch, should you need a thorough breakdown of the steps.

How to Get Brain Rotter Ammo and the Here Kitty, Kitty Trophy or Achievement in Black Ops 4

Now that you’ve unlocked the Pack-a-Punch machine in Black Ops 4 Zombies’ IX map, we’re one step closer to being able to kill a zombie tiger with a brain rotted tiger.

You’ll now need to rack up 5,000 points if you haven’t already, by killing the undead. Head back to the unlocked Pack-a-Punch machine in The Temple, and spend your 5,000 points Pack-a-Punching a weapon you’ve already got.

Alternatively, if you’re feeling up to the test, you can complete the different challenges of a Challenge Banner and get a free Pack-a-Punch pistol. That way, you’ll only have to spend points in the hope of getting the Brain Rotter ammo.

You’ll need another 2,500 points to Pack-a-Punch your weapon again and modify the ammo. This is where things can get a little tedious. You’re now at the mercy of the RNG Gods above.

The ammo type you want to receive is called Brain Rotter. It’ll give your gun a fancy yellow and green-looking skin when you do finally get it.

With a Pack-a-Punched, Brain Rotter ammo-filled weapon in hand, you’re ready to kill a zombie tiger with a brain rotted tiger. Once the tigers show up, that is. When a group of them do, use your Brain Rotter ammo and begin firing at them.

You’ve got a chance that a tiger will become infected, and turn on its allies. As soon as a brain rotted tiger kills a normal, zombie tiger, you’ll get the Here Kitty, Kitty trophy or achievement in Black Ops 4. The tiger should have a green aura around it and ‘Brain Rot’ should appear over its head, as you can see in the image above.

And there you have everything you need to know to kill a zombie tiger with a brain rotted tiger in Black Ops 4 Zombies on the IX map. You should now have the Here Kitty, Kitty trophy or achievement, too.

For more tips, tricks, and information on the game’s different multiplayer modes, be sure to check our Black Ops 4 guide wiki. Looking for guides for Voyage of Despair, too? We’ve got you covered down below.