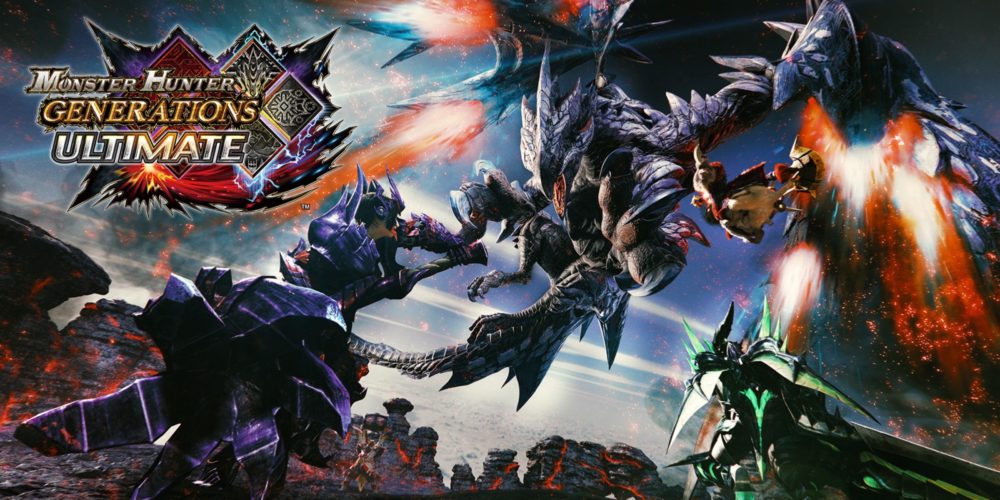 I am a self-proclaimed Monster Hunter noob. My first foray into the series began with Monster Hunter 3 Ultimate on the 3DS, which I promptly dropped after hours of clunky gameplay, but I dived right back in with this year’s Monster Hunter: World and fell in love with the endless grind. While I did skip out on Generations when it first released for 3DS, my experience with World encouraged me to check out the new Switch port, and I’m certainly glad I did.

Monster Hunter Generations Ultimate is an updated version of Generations. Most notably, this game includes the brand new G-Rank quests, which are supposed to be a cut above the High-Rank quests you got at the end of the vanilla version. It probably goes without saying, but the G-Rank hunts are reserved only for the most hardcore of hunters, and you’ll be hunting powered up versions of monsters you encountered before, but with better stats and improved move sets. New to Generations Ultimate is also the introduction of two new Hunter Styles, Valor and Alchemy, which add a bit more variety to the combat and gameplay. These can be a little hit-or-miss, but we’ll get into that later. Lastly, the Switch port also features updated graphics and visuals, and it looks pretty damn good.

Going into Monster Hunter Generations Ultimate, I braced myself for the graphical downgrade after spending so many hours in World. But to my surprise, the game doesn’t look too shabby at all for a 3DS port. The character models can look a little rough, but the monsters and environments were lovely for the most part. Thanks to the Switch’s larger screen, the UI doesn’t feel so visually cluttered either, and the interface is clean and easy to read. The game’s age only began to show when I was actually traversing the maps, which were segmented into different areas and separated by loading screens, classic Monster Hunter style. At this point, the loading screens definitely feel a little dated, especially if you’re coming from World, as you can run into annoying situations where a monster you’re hunting would be able to literally smack you into a different area if you’re standing too near the cut-off edge. It’s not a huge deal, but it can break the pace of the hunt. After a while, though, you’ll get used to the loading screens again, and the game becomes an enjoyable loop where you’re going on quests, gathering resources, and farming monsters for parts to craft a good-looking piece of armor.

Combat feels slow and a little clumsy, especially if you’re using the heavier weapon types like the Switch Axe or Great Sword, but Monster Hunter Generations Ultimate features Hunter Styles and Arts that can help to add more diversity to the gameplay. The original game featured the Guild, Striker, Adept and Aerial Styles, and Ultimate adds two more to the mix. Valor, which I used for the bulk of my experience, was an interesting one to experiment with.

By sheathing your weapon and pressing a button, you can enter a ready stance that allows you to tank through an attack and keep your combo going. Alchemist Style, on the other hand, is Capcom’s way of trying to introduce a support class to Monster Hunter. Alchemists can use items quickly, and also shake a barrel to provide a variety of buffs. It sounds useful on paper, but in practice, my hunter was always well-prepared with pre-hunt meals and other items that I never really saw a need to use the Alchemist Style.

In fact, after experimenting pretty extensively with Valor and Alchemist, I found it was much easier and efficient to just stick with Striker or Adept, which allowed me to build my skill meter faster and make use of the Hunter Arts much quicker to deal tons of damage. The addition of the new Styles is nice, but they just didn’t feel as fun to play when compared to the original ones. Valor and Alchemist also feel far more complicated than they need to be, compared to the original Styles, which can be a turnoff for fresh newcomers.

Oh yeah, you can also turn your hunter into Link and your Palico into a Korok if you want.

Thankfully, there are other ways to break up the monotony of the gameplay in Monster Hunter Generations Ultimate. Whenever you tired of playing as a human, the game features a Prowler Mode where you get to take control of a Palico and go on hunts that way. While the Palico itself has lower damage output than your hunter, it makes up for its shortcomings with unlimited stamina and faster gathering without having to worry about crafting pickaxes to mine or bug nets to catch critters with. Even in Prowler Mode, you get to take two other accompanying Palicoes with you, letting you create a literal cat squad. It’s great, and it’s a fantastic way to get through the game’s gathering quests a little quicker.

Of course, the real highlight of Monster Hunter Generations Ultimate is the sheer amount of content that’s been packed in here. Ultimate brings back tons of fan-favorite monsters from the series such as Diablos. There are returning monsters from almost every other game in the series, and even as someone who’s relatively new to the experience, it was still a pleasure to encounter them and see what all the fuss is about. Generations Ultimate features a total of 93 monsters, which is a pretty monstrous amount when you compare it to what we got in World. The game also features deviant monsters, which are monsters who had previously survived a battle with you, but are raring to get their revenge and come back stronger than ever.

After making your way through the multitude of Low and High-Rank quests, you’ll get access to the G-Rank hunts to face off against the strongest monsters you’ll find in Monster Hunter Generations Ultimate. The cool part about this is, even though you’ve battled these monsters before, you can still farm them for parts to craft better armor sets that also look different from what you’d get with the regular versions. The not-so-good news is that while these G-Rank hunts do take longer to complete, and they hit harder, they’re also not exactly radically different from their regular counterparts. In my experience with the G-Rank monsters, they were certainly more powerful and agile, but aside from that, it didn’t feel like there was much of a difference between hunting these and the normal ones. The jump from High to G-Rank wasn’t quite as drastic as I’d hoped, and that definitely weakened the end game grind for me.

As with most other Monster Hunter games, Generations Ultimate is at its best when you’re playing with other people. Whether it’s through local or online play, hunts are infinitely more enjoyable as a team, as different weapon types can help to weaken a beast in different ways. I managed to play a few multiplayer rounds during my time with the game, which all worked fluidly. It’s worth noting, as well, that connecting with other players here feels more straightforward and simplified than in Monster Hunter: World. With Generations Ultimate, it’s simply a matter of pressing a button to bring up a multiplayer menu, then choosing to either create or search for a hub you can join, and you’re off.

The fact that it’s available on the Switch is a huge plus as well, and I’m pleased to report that online hunts work well in handheld mode and when you’re leeching off public Wi-Fi. The ease with which you can connect to the internet on the Switch is a point in the game’s favor, and even when you’re playing offline, you can easily knock out one or two of the easier gathering and hunting quests during a short commute.

At its core, Monster Hunter Generations Ultimate is an absolutely fantastic game that excels when you take your hunts online. Despite being thoroughly impressed with how Capcom handled Monster Hunter: World, that didn’t dampen my experience with Ultimate at all. And in some ways, playing World first only enhanced my experience here, with how familiar everything felt and how much easier it was for me to experiment with Prowler Mode and the Hunter Styles. Despite a couple of outdated mechanics here and there, Generations Ultimate is a great debut entry for the series on the Switch, and it’s an easy recommendation for anyone who can find enjoyment in repeating the same tough content over and over in the quest for fashionable loot.