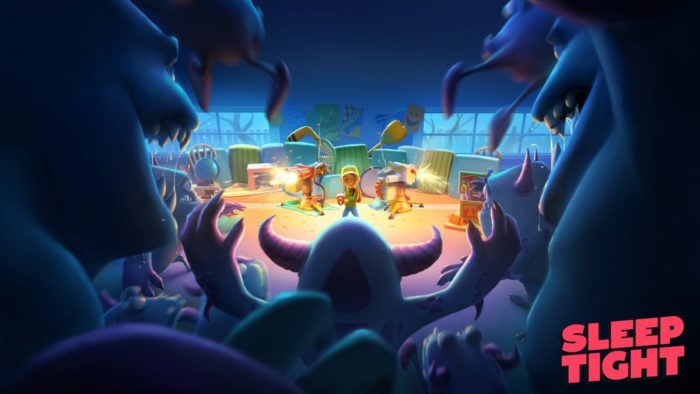 Sleep Tight is like Pixar’s Monster’s Inc, if the kids were heavily armed and willing to fight back. Very similar to other twin-stick survival shooters, you play as 12 different unlockable children who have to survive waves of increasingly terrifying monsters that attack your room.

Everything in Sleep Tight follows the kid’s bedroom aesthetic, where defense walls are pillow forts, guns can shoot water balloons, and turrets look like massive NERF guns. This is ultimately what makes Sleep Tight memorable when compared to numerous other titles that have similar gameplay with horde modes and base defense strategy.

You use two currencies at the end of the each night to build defenses, replenish your health, buy upgrades, and restock ammo. The first currency are suns, and you are allotted eight of them upon the end of every night (this can be upgraded to nine or 10 a night) and you use them to unlock pretty much everything in the game from health to turrets. The second currency are stars that are collected during battle after killing monsters. Stars in combination with suns unlock new abilities and gear, and level up what defenses you have already purchased.

New characters allow you to start the night with certain perks, such as unlocked guns, better defenses, or even a flashlight. Some are unlocked by surviving a certain amount of nights with the max being 45, others by completing certain challenges like never firing a shot for eight nights in a row  or using every power-up at once, and some by simply grinding and reaching certain game checkpoints like 10,000 total monsters killed or survive a total of 300 nights overall.

The final four characters, Kodie, Tommy, Picasso, and Ion each unlock new game modes. Kodie unlocks a “Trial of the Teddy” mode where the goal it protect an illuminated Teddy Bear at the bottom of the room, Tommy offers the “Operation Commando” first-person mode where you take less damage, Picasso unlocks “Ultimate Pillow Fort” where you start a never-ending night with 400 suns and 7,000 stars with stars being converted into ammo during the game, and Ion has the “Blood Moon Brawl” where you only play the Blood Moon levels that occur at intervals of 10 and you are granted tons of stars and suns at the end of every night.

These modes offer some nice variety to the normal basic horde mode format of the game, but overall Sleep Tight feels a tad shallow when it comes to content. There’s no real introduction to new characters or the game itself, only one map to play on across all game modes, and after every character is unlocked there is little incentive to keep playing unless maintaining a high score is something you really care about. Sleep Tight would really benefit from a story mode where you cycle through the new characters and they each have their own bedrooms that vary in shape and size for more strategy options on how you will survive the night.

As well, there are some apparent design flaws that make building specifically in Sleep Tight very frustrating at times. For example, the four stations you use to get items and level up are located on the floor of the room itself in the four corners of a square. As you survive night after night, you will start to accumulate more walls and turrets, and if you are not careful you will block out your ability to reach one of the stations and therefore have to destroy the items you have created. Not only that, but you also have to be aware of not blocking yourself into an area so you don’t limit access to turrets and walls you wish to repair after each night. With such limited space, having remember to add tight spaces to get to the stations or your defenses is both annoying and unnecessary. It could be easily fixed if, say, you had the ability to walk through any items you built when a certain button was pressed, or only when you are building and leveling up new things at the end of each night.

With these issues in mind, actually playing the main mode of Sleep Tight is still a fun experience. After my first couple rounds of only reaching around 25-30 nights max, it was entertaining to think up new ways to combat the increasingly difficult waves of monsters, sometimes focusing heavily on power-ups and weapons, others on defenses and perks. The first 20-ish levels can be a drag if you have just died and are starting up a new game right away, as Sleep Tight is best played as a pick-up game rather than one you sit and play with for hours on end.

It’s also worth noting the music is great, the art style is fun and memorable, and the level of difficultly is pretty balanced making the old cliche “easy to pick up, hard to master” pretty applicable. There’s definitely some fun times to be had with Sleep Tight, it just feels like the depth of gameplay is keeping me from being a game I will be playing consistently in the near-future.