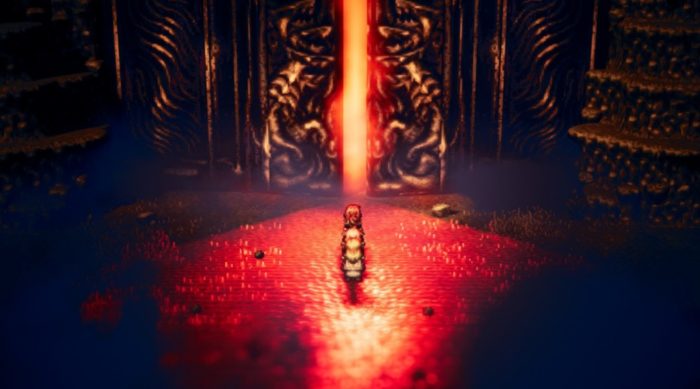 After beating all eight main stories in Octopath Traveler, you can continue to dive into post-game content, including a dungeon that supposedly ties the stories together in terms of lore. The Gate of Finis is consistently referenced throughout all eight stories, but if you’ve only played the main chapters, the game only introduces the concept without actually explaining what it is, or offering any kind of connection to the characters. As it turns out, the Ruins of Hornburg is actually a post-game dungeon that can be unlocked once you’ve completed certain side quests and interacted with certain NPCs, and it references the Gate of Finis as well. Here’s how to unlock the post-game dungeon in Octopath Traveler.

Here are the steps you need to take to unlock the post-game dungeon in Octopath Traveler:

There are two side quests you need to complete on top of finishing all eight character stories: In Search of Father, and Daughter of the Dark God.

Complete In Search of Father

In the quest In Search of Father, you’ll first encounter Kit when you finish the first chapter for your first character. He can be found right outside your starting city. Give him a Healing Grape, and he’ll be on his way. You’ll find him again in Noblecourt, where you must Allure or Guide the theater troupe member you met along the way, and bring him to Kit.

The actor himself can be found in the next screen, just to the right of Kit. Your final encounter with him will be on Moonstruck Coast, where you’ll need to bring him a Lapis Lazuli to complete the quest. You’ll need either Tressa or Therion to Purchase/Steal the Lapis Lazuli from a merchant at Grandport.

Complete Daughter of the Dark God

For Daughter of the Dark God, you can start the quest in Bolderfall, right outside Ravus Manor. A guard will be pining over a dark-haired woman nearby. Have H’aanit or Olberic Provoke or Challenge him, and win the duel. The quest will continue in Saintsbridge, where the soldier has seemed to continue stalking the dark-haired woman, Lyblac.

Have Alfyn or Cyrus Inquire/Scrutinize him to learn a poem from the soldier, then head to the Saintsbridge cathedral to find a woman named Flora. Give her the poem, and the soldier and her will enter a new relationship. Lyblac will then show up and say she’s close to finding her own soulmate.

Once you’ve completed those quests it’s time to get to the post-game dungeon! You’ll need to head to West S’warki Trail where you’ll find the impresario. Talk to him to trigger a new quest to defeat a mini-boss, then speak to him again once the fight’s over. You’ll then unlock the Ruins of Hornburg, which you can fast travel to on your world map. It’ll be in the southeast corner.

That’s all you need to know about how to unlock the post-game dungeon for Gate of Finis and Ruins of Hornburg in Octopath Traveler. If you need any more help, be sure to check our wiki for more information on Octopath Traveler. And thanks to Jason Schreier from Kotaku for comparing notes with us to put this together!

Question: How do you unlock the post-game dungeon in Octopath Traveler?

Answer: Complete the side quests In Search of Father and Daughter of the Dark God. After that, talk to the impresario at West S’warki Trail and defeat the mini-boss to unlock a new location on your map.