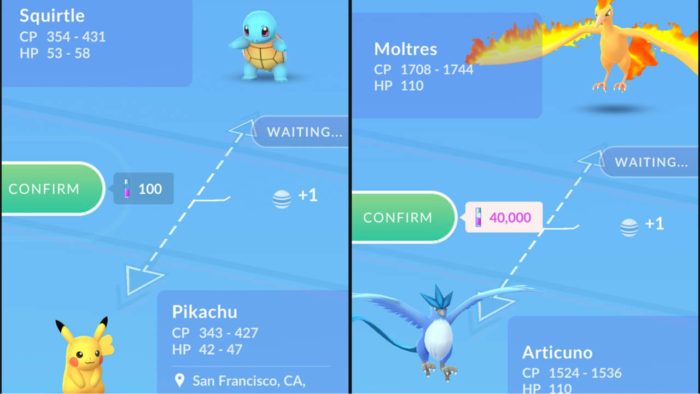 At long last, trading, gifting and friends are now available to Pokemon GO players, but only to players that are level 33-40. Though, Niantic has confirmed that they will be giving the features to players of other levels soon.

Confirmed via a tweet on the Pokemon GO Twitter account, the long-awaited features that have been sorely missing from the app are finally making their way to the game. Though the details on exactly how trading works are a bit complicated, this is still an exciting addition considering Pokemon’s original tagline of “Gotta catch ’em all,” which will be much more obtainable now that players will be able to complete their Pokedexes with entries sent over by their friends.

As typical of the friend codes for Switch and 3DS, trainers can send their friend codes throughout social media in order to add friends. Though, there is no word on the range at which trading and gifting can take place.

According to the developer insights on the Pokemon GO website, the additions of these features has been a long-term goal since the game’s creation as trading is obviously one of the biggest features in all mainline Pokemon games. These are also just the beginning of interactive features that Niantic has planned for Pokemon GO players. The team is “continuing to explore more ways to bring special interactions to Pokemon Go” in order to create a more meaningful space for real-life interactions between players.

With legendary Pokemon announced along with the upcoming Pokemon GO Fest, the summer of Pokemon GO updates seem to be just heating up.