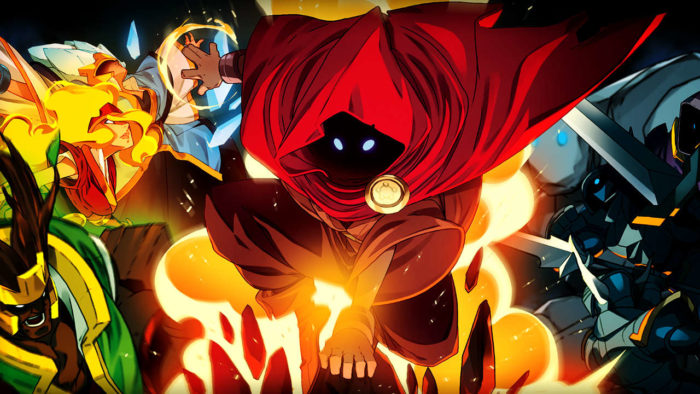 Wizard of Legend on Nintendo Switch

Stepping into the museum for the first time was like entering Disneyland. Your character wraps themselves in a colored cloak as they take their first tentative steps into the museum, alongside dozens of other excited patrons keen on seeing the artifacts and arcana of the wizards of yore. The wizards of legend, if you will.

The sprightly soundtrack certainly added to the mood, as my character eagerly stepped up to the receptionist’s counter to get their first arcana move: the wind slash. As you move through the museum, you get to see statues of the powerful wizards who had mastered the Chaos Trials, as well as a look at some of the awesome elemental spells they had at their disposal. Perhaps Disneyland wasn’t the right comparison. With the way the wizards of this world could bend the elements to their will, punch their limbs out and summon bolts of lightning or a whoosh of air, the museum felt more like a tribute to the Avatars who could master all the elements.

Wizard of Legend is a roguelite game where you’re tasked with going through dungeon run after dungeon run, failing a few times, learning from your mistakes, and then attempting another run to see if you can finally make it to the end this time. Because it’s a roguelite, though, Wizard of Legend also feels far more forgiving than the likes of Binding of Isaac and Enter the Gungeon in terms of progression. After failing your first few runs, you will eventually become proficient enough to gather a few gems during each attempt, and then come back to town to unlock some new spells to make your character even stronger.

Unfortunately, the game can be a little obtuse in explaining its mechanics to the player, so here are the rules. Gems and gold are the two main types of currency you’ll use in Wizard of Legend. Gems are used to purchase spells, relics, and cloaks in the town plaza, right before you start a dungeon run. Whatever you buy with gems, you get to keep forever. Gold is used to purchase spells and relics when you’re in the dungeon itself. There are a few vendors to be found in the procedurally generated maps, but whatever you buy with gold, you lose when you die in the dungeon. There is one exception; if a main dungeon boss (of which there are three) drops an arcana spell for you upon defeat, you get to keep that. Similarly, the final boss drops a random powerful Chaos spell every time you complete the dungeon. You keep that forever as well.

Because of the way the game is structured, Wizard of Legend makes sure that you never feel like you’re wasting your time when you inevitably die in a dungeon. All the gems you scrounge up in a dungeon can go towards unlocking a new spell or item in the plaza to give you better boosts during your next run. Even if you don’t earn enough gems in one go, you still have the opportunity to buy new stuff with gold and try them out for basically free in the dungeon so you can keep an eye out for them in the plaza if you wanted to unlock it permanently.

That’s not to say that Wizard of Legend is an easy game, because holy hell it is not. The combat is fast-paced and surprisingly deep and nuanced for a game of this genre. There are a crap ton of spells to unlock in the game, and they’re classified by arcana: fire, air, lightning, earth, and water. At the start of the game, you’ll have three basic slots and one signature slot for a slightly more powerful move. You can mix and match the various elemental moves into your deck, find the ones that work best for you, and start building your own combo moves from there. It is extremely satisfying to freeze your enemies temporarily before following up with a wind-based uppercut and finishing off with a deadly fireball. Once you time it just right, the elemental combos truly make you feel like a magic-wielding martial artist, and it’s awesome.

Not only that, the great thing about Wizard of Legend is that your spells are all on such low cooldowns, with the exception of the signature moves that take an extra couple of seconds to charge. This means that you’re always free to chain combos however you want, making the action feel that much more satisfying. This doesn’t mean that you can just spam moves and stunlock enemies forever, as it’s still easy to get caught up in your combos and forget to dodge an attack.

The dungeon bosses have elemental weaknesses as well, so while it might be tempting to just use a specific element, it’s usually better to have at least two elements at your disposal. Experimentation is half the fun, though, and I found it hard to resist trying to collect every single spell and trying them all out to build the perfect deck. The primary challenge of this game lies in timing your dodges and avoiding getting hit by your foes. Boss moves are always well telegraphed, which means you should always have just enough time to get out of the way. It’s just a matter of balancing your evasive maneuvers and dealing damage at the same time.

The game gives players plenty of freedom over build customization, and there are so many deck combinations and permutations that it’s going to be hard to find someone else with the same loadout as you. Aside from spells, there are also various relics you can equip, which will give you special bonuses in-game. For instance, equipping the Dark Katana will increase your critical chance and damage. On the flip side, there are also cursed relics you can find in the dungeons, which offer you great power with interesting trade-offs. Some might offer you more damage but reduce your max health, while others let you triple-dodge but greatly reduce your regular walking speed. Depending on your character build, some of these trade-offs might not affect you all that much, and you could even use them to your benefit.

If there’s one major complaint to be had about Wizard of Legend, it’s that there are only three main dungeons and bosses before you get to the finale, which means that you should be able to see most of the content by your 10th hour of gameplay. While the spell unlocks are cool and the combat is extremely satisfying, if you’re looking for a game with countless unlockables and massive replay value like in Binding of Isaac, Wizard of Legend just isn’t there yet.

In addition to that, the game offers zero explanation as to what you’re purchasing. You can’t read item descriptions before actually purchasing an item, which means you’ll just have to buy that spell or relic to find out what it does. If it’s a trash spell or relic, well, then you’re out of luck. You’re not getting a refund. Thankfully, the experimentation in the combat system is fun and compelling enough to prevent players from staying too mad at the game.

Wizard of Legend is no slouch in the design department either. Enemy types are varied, and you’ll get to fight a few distinct types as you move through the levels. The NPCs themselves are charming, often offering a cute little soundbite whenever you purchase an item from them. Even the bosses are memorable, with each being a master of a specific element. The ice queen will tease you about getting “cold feet” right before the fight, and then spew some other silly ice-related pun after you defeat her. The item names in this game can be witty and tongue-in-cheek, such as the cursed relic Overpriced Insurance, which gives you a fraction of health in exchange for all of your gold. Too real.

My time with Wizard of Legend was largely pleasant, though I must mention that the game does suffer from slight frame drops and hitches on the Switch. Thankfully, this was never an issue during critical moments in a dungeon run, but it did happen frequently enough to warrant a mention in this review. For the most part, the game is an absolute blast, and every aspect of it just oozes charm. The beautiful 2D pixel graphics, the warm soundtrack, and the flavor text just add so much personality to this experience, making Wizard of Legend a real standout in the roguelite genre.

At the end of the day, I couldn’t quite become the Avatar I wanted, choosing only to specialize in lightning and air spells, and zapping my enemies to death. Still, Wizard of Legend succeeds in creating a setting that’s just full of so much mystery and awe. It’s hard not to feel so completely enthralled by the game’s charm and delightful magical spells. If you have even a passing interest in a world that’s centered around elemental magic, or if you’ve always wanted a game with element bending-style combat like in Avatar but with a dash of that Disneyland childlike wonder, play Wizard of Legend.