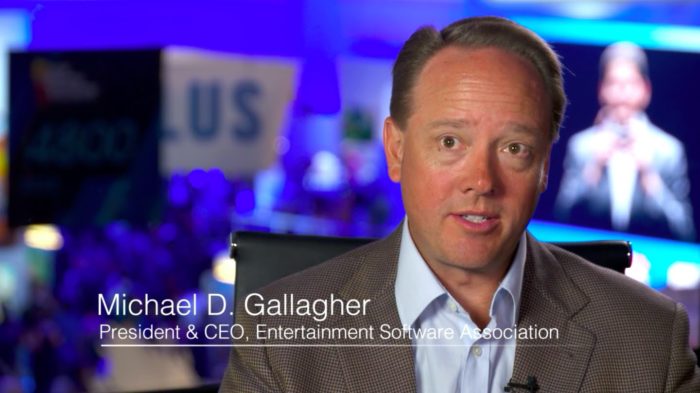 In a talk given at the Nordic Game Conference, Electronic Software Association president Mike Gallagher provided a stance from the organization on the recent controversies surrounding loot boxes, arguing for their usefulness in game design models and reaffirming the group’s belief in the continued autonomy of the video game industry’s regulation by its own members.

Held on May 25, the talk touched on the state of the industry and the ways in which developers’ business models have continued to contribute toward the industry’s growth, including the growing use of loot boxes as an ongoing monetary gain model. Gallagher stood firmly by these models as ways in which players can enhance their own individual experiences, and argued against the recent rulings by gambling commissions in Belgium and the Netherlands as going against the self-regulation methods which have proven effective throughout the lifespan of the video game industry.

“Video games never take money from a player and leave them with nothing. They never do. Players always receive an in-game feature that aids in customizing their experience,” Gallagher said. “When you look at the definitions of gambling throughout the world, and how this is done and how it’s regulated in places like Las Vegas and the US, it’s quite different to the mechanism with loot boxes in games.”

Loot boxes have remained a prevalent issue within the industry for several months now, facing heavy scrutiny from legislators around the world for being a potential form of virtual gambling, European countries such as Belgium and the Netherlands ruling them as being in violation of the countries’ gambling laws, even requiring some developers to alter their games’ design models in order to continue selling them within the countries.

Gallagher argued for the continued self regulation of said systems by those within the industry, pointing to the continued efforts of the ESA and its affiliates like the International Age Rating Coalition to ensure the safety of those consuming games.

“When you look at these other decisions, we can’t go to the lowest common denominator of government around the world, and make that the standard the rest of the world has to live by, and limit the trajectory of the industry,” he said in a later Q and A interview with GameIndustry.biz. “That’s not the best approach. Instead, we believe it’s best to be clear about the facts, and make sure those carry the day around the world, so we drive an outcome that best extends the [games industry’s] frontiers and looks after the interests of gamers.”

For more on the subject of loot boxes and their use in games, check out our coverage on Id Software’s choice not to include them in the upcoming Rage 2.