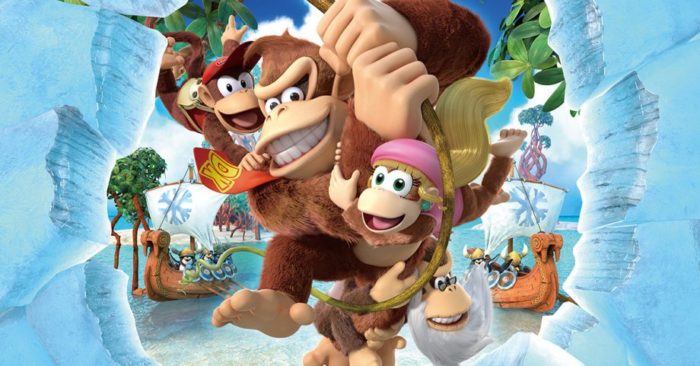 With every Wii U game that comes to the Nintendo Switch, they feel more at home on the new system than they did on the old. Donkey Kong Country: Tropical Freeze is yet another example of that, and it shines more than ever on the handheld hybrid.

Tropical Freeze sees the Kong family happily celebrating a birthday, when the Snowmad ships abruptly put an end to it and freeze over Kong island. Donkey Kong, along with the help of Diddy, Dixie, and Cranky, has to travel through the nearby islands and make his way back.

The game looks and feels great on the Nintendo Switch, especially in handheld mode. Slight improvements have been made to the game’s graphics and loading times, with the latter making for a much smoother experience overall. I spend most of my time with the game playing in handheld mode, finding myself enjoying the more portable experience. The only issue I had pop up with this was on levels, especially boss battles, that zoomed the camera way out. These levels made Donkey Kong look tiny on the tablet screen, and although it was still playable, it did become more difficult to see the action.

You’ve probably already heard this somewhere, but Tropical Freeze is one difficult game. Not difficult in an unfair way, but absolutely challenging. The controls are superbly tight, letting you pull off exact jumps, rolls, ducks, and whatever else you need. The game consistently throws some crazy platforming challenges at you requiring great timing, however, there’re often multiple ways to get through a situation. Most levels in the game have ways of solving its platforming challenges with just Donkey Kong himself, or if he has another Kong along with him. The difficulty ramps up throughout the game, right until the very end, but when you die it’s almost always your fault for making a small mistake, or not having the timing right.

The thing that amazes me about Tropical Freeze, even four years later, is how varied all of its levels feel. Many of the levels have a gimmick, such as being all about barrel shooting, or having you put out fires with water fruits while you’re advancing, or even changing the aesthetic to make everything a moving shadow. The amount of variety is absurd, and even right up until the end there are fun, new challenges getting thrown your way. By far this is Tropical Freeze’s biggest strength, helping to keep the game rolling forward, and always keeping you on your toes.

Tropical Freeze on Switch is virtually the same game, outside of a few enhancements and one key difference, Funky Mode. As you might expect from the name, this mode lets you jump into the shoes of none other than the coolest Kong, Funky Kong himself. This is an entirely new option when you start up the game, and Funky comes with a number of boosts that make him more equipped to face the game’s challenges. He starts with five hearts instead of two, can float on his surfboard, and double jump.

Playing as Funky makes Tropical Freeze significantly easier, although there is still a challenge. It’s not an invincible mode, so especially in later levels, you’re still going to have plenty of trouble overcoming the game’s challenges. However, Funky Mode helps make the game much more accessible, especially for those who may not be quite as good at platforming games. It’s a smart way to bring an easy mode to a game known for being difficult, and Funky Kong is just a blast to play with.

Donkey Kong Country: Tropical Freeze was already a strong title on the Wii U, and the Switch version simply makes it even better. Those that may have been turned off by the difficulty before can now feel free to jump in with Funky Mode, and the improvement to loading screens really does make a difference. It’s yet another strong checkmark on the list of growing titles Switch owner need to have.