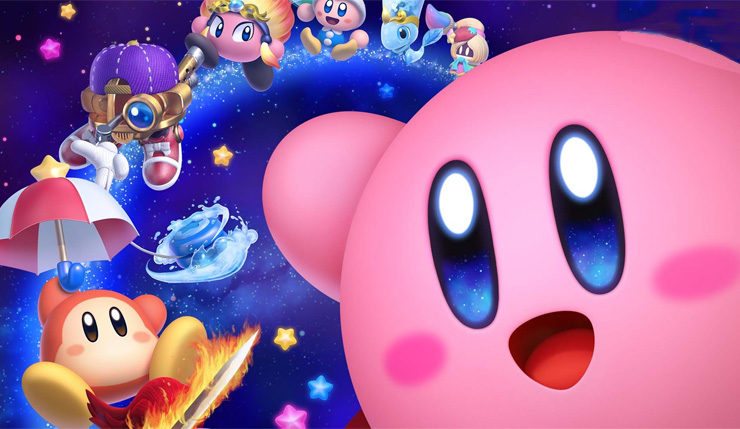 The Kirby franchise has one thing really going for it right now. Kirby is fun to play no matter what. HAL and Nintendo can really put whatever they want around Kirby, and no matter how successful or unsuccessful it is, it would be nearly very difficult for me to give it a poor score as long as I’m going to be floating around, sucking up enemies, and using fun copy abilities. That formula is timeless. That said, Kirby Star Allies is one of those times where what is on offer aside from the classic gameplay isn’t that appealing.

Kirby Star Allies’ main gimmick is that instead of just pounding enemies into a pulp or consuming them, Kirby can recruit them, and fight alongside former enemies. You can utilize each enemy’s unique powers to solve puzzles and enhance Kirby’s abilities. For example, if you’re using the Sword ability, and have a fire ally, with the push of a button the fire ally will turn your Sword into a flaming Sword that does more damage. There are also powerful combination moves that you can unleash too. Combine a rock ability with ice and Kirby can turn into a curling rock and slide around like a madman destroying anything in its path. If you’re on your own, the CPU will control each ally (and the AI is competent enough), but the true appeal is having friends over to control your allies instead (up to four).

Here’s the main problem. On paper, all of this sounds great, but it runs up against a long-running problem within the Kirby series; and the ally mechanic puts a spotlight on it more than the previous two 3DS games have: Kirby is too easy. What is the point of having three allies help you when you can handle everything on your own practically in your sleep if you’re over the age of five and have played a video game before? I tried playing through parts of the game’s four world-long campaign with a friend, and the only way they were having any fun is if I intentionally held back and let her kill things. Kirby just doesn’t need any help.

There are just so few times where the team is actually needed to complete anything which leads to very few moments of satisfaction with the game’s most touted feature. It feels like Kirby is being forced to work on a group project with a bunch of idiots (we’ve all been there), instead of being part of a team that equally contributes to its success.

Kirby Star Allies has puzzles that force you to combine powers to solve, however, they are so obviously telegraphed to the player that it feels more like a waste of time. You’ll enter a puzzle room and have the two powers/allies you need right there waiting for you. It’s just boring and pointless.

The ease of figuring out these rooms undercuts a lot of the campaign’s replay value since they are what usually contain the game’s secret levels and collectible puzzle pieces. It used to be exciting to find secrets in Kirby games because they were actually fairly well hidden and occasionally challenging to progress through. That’s not the case here.

There were only a few times where the allies could have potentially been helpful, namely a few of the challenging boss fights and the hard mode boss rush available after beating the game. However, having four people just going crazy with their powers makes the screen so busy that it’s difficult to follow what the boss is doing. So much so that I’d honestly prefer to just be on my own.

If you’re willing to overlook that the Allies mechanic fails to actually enhance this game, and that aside from said mechanic, Kirby Star Allies is very traditional and overly simple, there is a decent party game to be found. Although you don’t need help, and the allies make the screen unnecessarily busy, if you’re playing with a bunch of friends, you can probably find your own fun in messing around in the campaign, using your favorite power, playing one of a handful of mini-games included, or tackling the aforementioned boss rush mode.

Moving on from the allies mechanic quickly before wrapping up: It’s worth mentioning again that in spite of striking out a bit in adding something new, Kirby Star Allies is still a game worth playing. The Nintendo Switch makes Kirby look better than it ever has before, and the music is on point. This is especially true during the bonus stages which feature some of the classic tunes from Nightmare in Dream Land. Kirby Star Allies also adds a lot of fun copy abilities including the return of Cleaning, which is beefed up big time in Star Allies, allowing Kirby to fly around like a witch on a broom. And, if you have a favorite copy ability, you can try to one shot the entire campaign with it in a speed-run mode that forces you to play as one of Kirby’s enemies-turned-allies. It’s a mode that won’t appeal to the casual fan for very long probably, but it’s something for veterans to put their skills to the test in at least.

It would take a monumental effort to make a Kirby game “un-fun.” Kirby Star Allies isn’t ruined because of the allies mechanic, it still functions as an enjoyable Kirby game. However, the allies mechanic rarely feels like it’s enhancing the gameplay, and at times, drags it down. If you’re a veteran of the series, the easy difficulty is likely getting frustrating and has stunted the growth of the franchise. Star Allies was an opportunity to address it, and instead, if anything, it makes it worse.