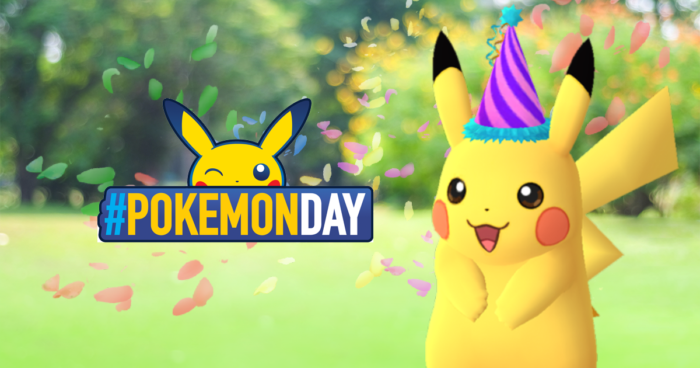 Pokemon Day celebrates the launch of Pokemon Red and Green in Japan on Feb. 27, 1996. The Pokemon Company is making the 22nd birthday of the franchise special with Snapchat filters, apps for your smart speaker, a special Pikachu in Pokemon Go, the ability to stream Pokémon the Movie: I Choose You!, and the launch of large Pokemon collectibles.

Snapchat users around the world are now able to feature Bulbasaur in their photos, with support for Charmander coming soon, and Squirtle after that.

If you have an Amazon Alexa or Google Home, you can now download the Pikachu Talk app to ask Pikachu questions and get the deep, well thought out answers such as “pika pika!” you’d expect from the Pokemon.

Trainers should be keeping an eye out, as a special Pikachu donning a festive purple hat will be around until 1 p.m. PST Feb. 28. The special Pikachu will award players triple the normal amount of Stardust when caught and will automatically know the move Present. An update also recently brought trainer items from Pokemon FireRed and LeafGreen to Pokemon Go for players to dress their avatars in.

Last year’s Pokemon film, Pokémon the Movie: I Choose You!, will be available for a week on the Pokemon TV app for iOS and Android, as well as on Pokemon.com/TV.

The Pokemon Center has more goodies lined up for this year’s celebrations, including the first Pokemon Gallery Figure DX, Charizard. Pokemon Gallery Figures launched on Pokemon Day 2017, and a year later the larger versions that dwarf the originals are seeing the light of day. The Pokemon Center is now also selling Legendary Pokemon Pins to celebrate this as the year of Legendary Pokemon. This month’s Legendary Pokemon Pins are Dialga and Palkia, but every month through December a new pair of pins will debut on the store.

Last year, Pokemon Day also played host to a number of special events, including more hats on Pikachu in Pokemon GO, a number of free movies on Pokemon TV, and the streaming of competitive Pokemon battles from the card games and video games on Twitch.