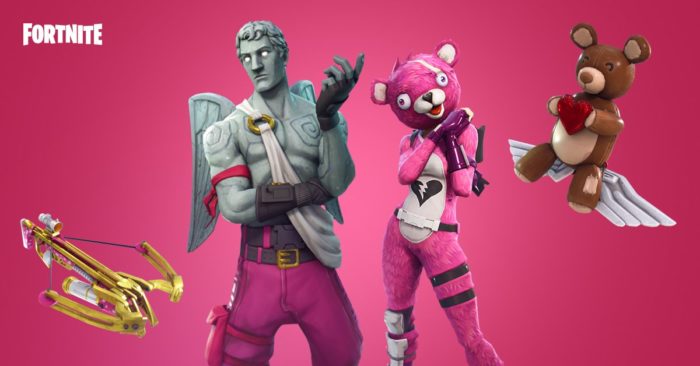 The Valentine’s Day update for Fortnite is now live, though it missed its intended holiday release.

The 2.5.0 update includes a Valentine’s Day-themed quest line and the Cupid’s Crossbow weapon, as well as new skins for the game’s characters. In addition to the holiday themed content, players can also take part in the new “reactive” quest types and can increase the difficulty of the game’s Save the World mode.

The update’s launch comes after several delays by developer Epic Games. Originally intended for release on February 8, the update was pushed back to Valentine’s Day and then delayed again on the holiday with an announcement made via Reddit.

“Our v.2.5.0 update will release tomorrow; we apologize for the poor communication around this release and the delay of the patch,” Sean Hamilton, community coordinator for Epic Games, wrote in the post.

The delays have also caused issues with the game’s seasonal gold reset. Intending to wipe players’ current gold with the release of the 2.5.0 update, Epic Games is now altering their plans due to the delay and exchanging fire cracker tickets for gold.

“Due to the delay in the build, there is nothing in the event store and Storm Llamas have disappeared,” Hamilton wrote. “We did a poor job communicating this and did not create a good experience for you.”

Moving forward, the company plans to communicate more clearly when and how updates will be released.

Fortnite is currently available on Xbox One, PlayStation 4 and PC. For those wondering if the game will come to the Nintendo Switch, take a look at what Epic’s creative director had to say on the subject.