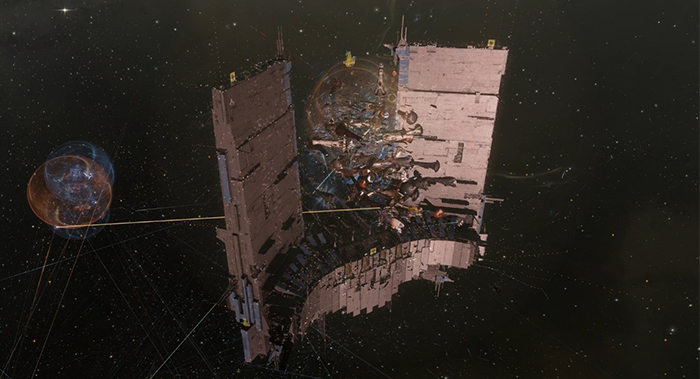 When EVE Online’s playerbase realized an oncoming war could result in a million dollars disappearing, the entire gaming community stood by waiting for carnage to begin. Although the leaders of the two sides involved tried, no massive battle ever took place because EVE’s servers’ couldn’t handle the amount of players involved.

In an attempt to destroy a “Keepstar,” essentially EVE’s Death Stars, several alliances including the “Goonswarm Federation” and the “Northern Coalition” invaded sector 9-4R, losing 831 ships during the battle. These alliance, fighting under the leadership of Alex “The Mittani” Gianturco for the Imperium faction. During the battle, the “Pandemic Horde” defending side lost 534 ships, but succeeded in defending the Keepstar, and maintaining temporary control of the sector. As reported by Bill McDonough on the Imperium’s news site, when these thousands of players attempted to meet in one place, the servers buckled, with many players losing connection, and others having extreme framerate issues.

According to an EVE developer, the battle actually broke the world record for most gamers in a player-versus-player battle, with over 5,500 players being involved. This broke the previous record held by EVE at 5,337 players which was set in Dec. 2016. According to a tracker site, of the almost 4 thousand players involved in the battle for the Keepstar, 516.16 ISK was lost in the battle, which is equal to approximately $3957 USD.

During the battle, due to the poor connection, neither side involved their Titan ships, which are the largest and most valuable ship in the game. Despite the inability to use their titans, both sides showed off their army in spectacular fashion, with the Northern Coalition Fleet Commander, famous EVE player Killah Bee, bringing in his special faction-exclusive titan worth four times a regular one, according to EVE beat reporter Andrew Groen.

Although the Goonswarm Federation and co. fielded 57 titans during the battle, none of them engaged with the enemy, likely as a show of force. According to CCP Games, the developers of EVE, the Keepstar will open up for attack again on Monday, Jan. 29. Most videos of EVE online battles are depicted as dots on a screen of spreadsheets, but for this battle, CCP Games recorded a video showing the action.