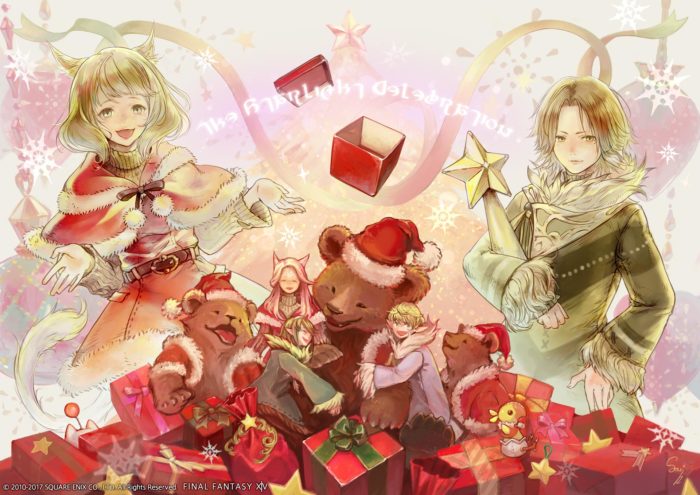 Final Fantasy XIV’s annual celebration of the holiday season, appropriately named the Starlight Celebration, has been announced by Square Enix today, ensuring that the usual cheer and joy that accompanies the seasonal event arrives in full force.

Beginning this Friday, December 15, and lasting until the end of the month on December 31, a holiday-themed quest line will be available for players to try out as in previous years. It can be initiated by talking to Amh Garanjy and starts at the amphitheater in Gridania. The event requires players to at least be level 15.

Though unfortunately there are no skins rewarded this time around, Starlight Celebration more than makes up for it by offering players a flying bear mount dressed like Santa upon successful completion of the quest. Users who ride the mount can throw presents that explode into pretty snowflakes on impact. If that doesn’t sound like the most Christmas-y thing ever, I don’t know what does.

Players will also be gifted two tabletop decorations, a mini-Christmas tree, a poster, and an orchestration roll for their efforts, the likes of which probably includes the adorable Starlight Celebration theme we’ve all grown to love.

For those of you curious about how the game is faring in 2017, Final Fantasy XIV released its latest expansion Stormblood this past summer, adding more jobs, gear, and changes to the MMO’s battle system. If today’s news serves as any indication, it seems as though the game will continue to be supported well into 2018 and perhaps even beyond.