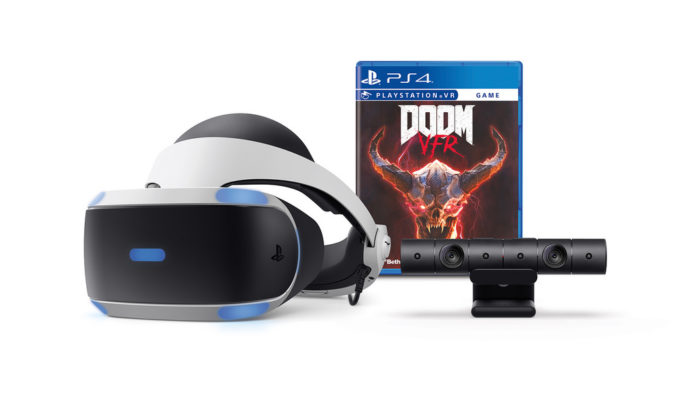 In anticipation for the upcoming Doom VR release today, Sony has announced a Doom VFR Bundle for PlayStation VR.

Set to release next month, purchasing the bundle will give people a PlayStation VR Headset, a PlayStation Camera, Doom VFR, and an updated PS VR Demo Disc that contains 13 playable demos.

Doom released in 2016 for consoles and PC to critical acclaim and success, being praised most for its return to the fast, violent gameplay of the series’s roots. It told the story of Doom Guy as he awoke in the UAC Martian Facility and proceeded to spend the next several hours demolishing his ways through armies of demons. However, while Doom VFR will use many of the same aesthetics and assets, it’s reported to be a separate game built more around VR’s capabilities while telling its own auxiliary story as opposed to a direct one-to-one port.

Doom VFR will, of course, still feature the same critically-acclaimed high speed shooting action its console predecessor was known for. The game is set to take place in the UAC Facility on Mars and the depths of Hell, putting players to task in slaying hordes of demons in the game’s violent and visceral combat. Set shortly after the demonic invasion of the UAC Facility, you play the last known survivor in a struggle to overcome the odds and survive. Under a top-secret UAC emergency protocol your consciousness is transferred to an artificial brain matrix with the sole purpose of restoring operational stability and using anything you can to stop the hordes of demons.

The game offers a number of different ways for fans to enjoy the game, allowing players to use either a DualShock 4 controller, PlayStation Move controllers, or the PlayStation VR Aim Controller at their discretion.

The PlayStation VR DOOM Bundle will hit shelves alongside the game’s release on December 1st in the United States and Canada for $399.99 USD or $499.99 CAD respectively. Alternatively, fans can pre-order the bundle now if they wish.