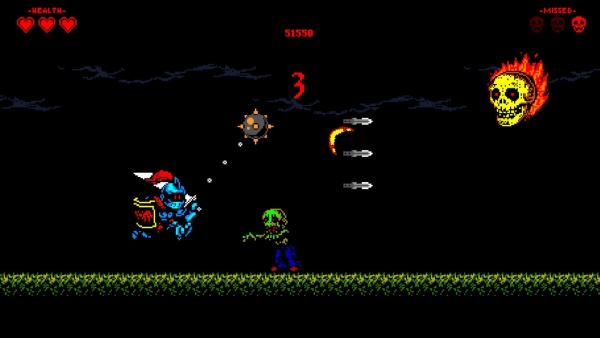 Nicalis and FreakZone Games have teamed up to put together Knight Terrors, an arcade-style side scrolling adventure that’s coming to the Nintendo Switch this month on Oct. 24.

Knight Terrors looks like a creepy good time, following a suit of armor known as “The Knight.” The knight’s sword allows him to cleave through enemies with the greatest of ease, and his wings allow him to fly through the night.

He’s up against the hordes of enemies in the night, bloodthirsty ghouls who are looking to end things for him. You get three hits before it’s Game Over, or you can let three enemies pass you by.

The game looks pretty old school and gritty, especially with its retro sensibilities. It’ll have screen-shaking, time stopping, and gorgeous sprite graphics in addition to two-button controls. Power-ups, unlockable game modes, and procedurally-generated levels will keep the game going so you can come back for more.

If Knight Terrors looks up your alley, check it out when it releases near the end of the month on Switch.