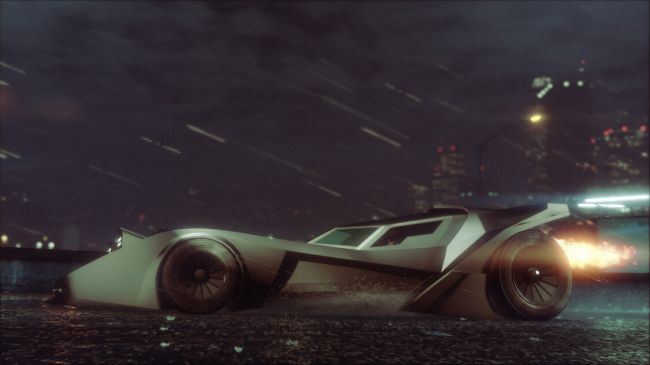 A Batmobile homage car, the Vigilante, was teased in the Smuggler’s Run update for GTA Online when dataminers found evidence for it in the code. Rockstar has finally officially taken the lid off of the new car, and we’ve got the first screen of Grand Theft Auto: Online’s not-Batmobile.

The Vigilante is slated to release with the upcoming Transform Races update for GTA Online. Transform Races are meant to be an evolution of Stunt Racing which will combine land, sea, and air vehicles for courses that cover all of Los Santo’s varied terrain. In addition to the Vigilante, a new supercar, the Coil Cyclone, and a variation on the Hunter attack helicopter will come with the new update.

The new update will also contain two new modes as well. Condemned will designate one player as a target, which others will have to hunt. If the condemned player kills someone else though, they transfer the condemned status to their victim. There will also be a new aerial battle mode called Dogfight. Predictably, Dogfight will center around players taking each other on in the air.

Rockstar hasn’t given a release date for Transform Races, but the update should hit GTA: Online in the next few months.