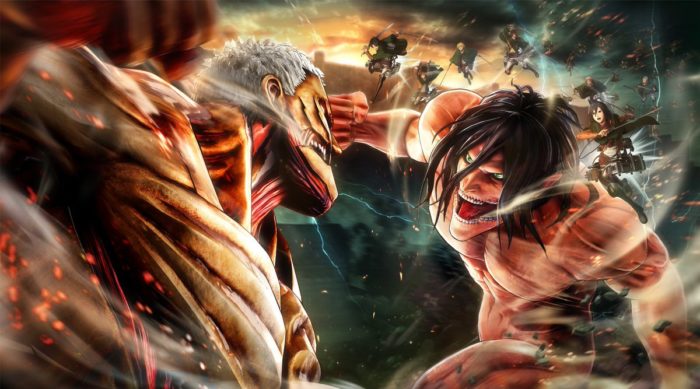 Earlier today via livestream, Koei Tecmo officially revealed new information, gameplay and a release date for their upcoming sequel to their Attack on Titan video game. The game, much like its predecessor, is slated to be an open world hack-and-slash game where the player controls major characters from the hit manga series as it tells the story of the series from where it left off in the previous installment.

One of the biggest reveals of the game is the fact players will be able to create their own original characters in the Attack on Titan universe and see the story from their perspective. The livestream offered new looks at the gameplay as well as confirmation of a number of playable characters including the return of the main trio and Christa as well as newcomer Ymir. In addition, the livestream also revealed the Monocular as a means of being able to observe a situation and form tactics from afar.

For those who might need a refresher, Attack on Titan was a manga turned anime that became a smash hit in the anime community. It told the tale of Eren Yaeger and his journey to avenge the death of his mother at the hands of the titular Titans and is well known for its dark themes and violent imagery. Both of which were prevalent in the Koei Tecmo’s first Attack on Titan game which recapped all of the anime’s first season and delved a touch beyond to bridge the gap for the second season. Attack on Titan 2 takes place during the anime’s second season and will retell the story of the series. Although whether or not it will go beyond it like the first game is not yet known.

You can see 30 minutes of the upcoming game via the livestream recording below.

The first game, released in 2016, was well-received among critics with a general consensus that the gameplay was visceral and fun if not repetitive in the long run. Although many felt its endgame was needlessly padded, the game still sits at an overall positive rating with critics and fans.

Currently, the game’s sequel is set to release for PS4, Switch, Xbox One, and PC in March 2018.