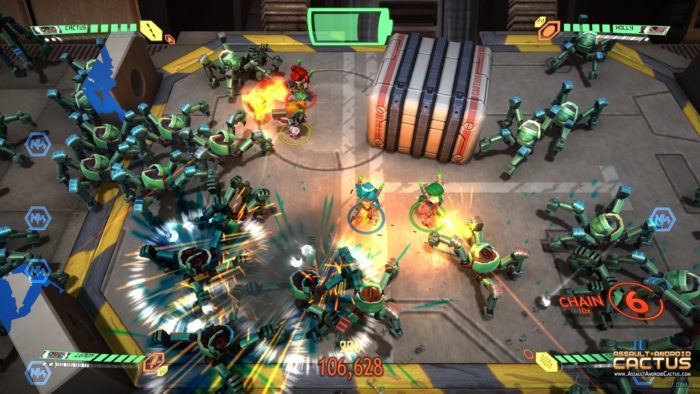 Twin stick shooter Assault Android Cactus is headed to the Xbox One this November with full Xbox One X support, just in time for the worldwide launch of Microsoft’s next console.

Featuring a variety of android heroes for up to four players, Assault Android Cactus will have you fighting through swarms of robotic enemies and challenging boss battles, with the twist coming in how you survive. Instead of a traditional health bar, your chosen character runs off a constantly draining battery that can only be recharged by picking up battery packs among the swarm of bullets and power-ups. The more you maintain your charge, the longer you’ll survive the many game modes available, including boss rush, the constant waves of enemies in Infinity Drive or unlock new options such as a first person perspective.

Australian developers Witch Beam has updated the engine to support the Xbox One X, with native 4K at 60fps along with an optional developer commentary for those curious about the inner workings of the game. You’ll be able to try Assault Android Cactus before purchase thanks to a 30 minute demo that should be available on or before the full launch on Nov. 7th.