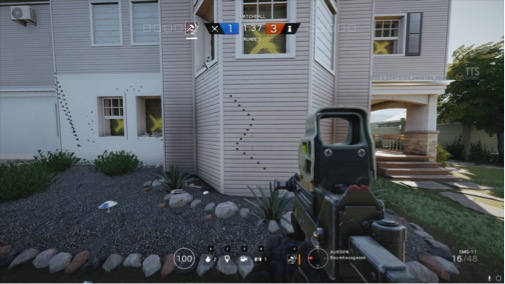 After a community video was submitted to the development team of Rainbow Six: Siege depicting recoil issues with a L85A2 assault rifle in-game, an issue was identified with all weapons that caused fired bullets to not always land where the reticle was placed. This would vary from missing the intended targets by only small margin, to spraying the bullets clearly past the reticle.

In a post on the Rainbow Six: Siege Dev Blog, it is said that this issue arose because weapon sights are displaced from center screen for a player when recoil is being applied. Adding, “We did this to create a spray type system while still firing the bullet where the weapon appears to be aiming. Unfortunately, that didn’t work out the way we intended.”

Therefore, there was a disconnection between the first-person viewpoint of aiming the gun’s recital to the game world’s understanding of where those bullets will land. “The gun you are holding is rendered at a fixed 50 FOV (“field of view”), but the world is rendered at 60 FOV for consoles and anywhere from 60-90 FOV on PC. Because of this, any amount of movement we do with the first person visuals off the center of the camera will immediately cause alignment issues with the weapon.”

Therefore, a whole new multi-stage recoil system that allegedly can, “…define as many recoil data sets as (Ubisoft) wish(es) at any stage during a fully automatic spray.” Some players have taken to Reddit to complain about some of the new recoil patterns currently available for playtesting. One Reddit post allegedly shows the pattern for the SMG-11 that looks just like the shape of Harry Potter’s scar, while other guns appear to create basic straight or arcing lines.

The complaint here is that some Rainbow Six: Siege players think the static recoil patterns proposed, also found in games like CS:GO, would mean that the guns would always fire the same way and cause predictability in combat gameplay. In one post on the Rainbow Six: Siege subreddit, Reddit user RwyUJJtV believes this change will affect how other users pick classes saying, “Static recoil patterns encourages people to main Operators instead, simply learning a few guns and never trying anything new. Ubisoft. People do not want this. It’s detrimental to the overall health of the game and community.”

The blog post from Rainbow Six: Siege’s developers states the guns will be divided into families of recoil patterns, with the groupings seen below:

Shotguns, pistols, DMRs, and some of the lower rate of fire SMGs have been excluded from the above list as their recoil systems have not be totally reworked. For the future, the game’s developers say “Our vision is to have a recoil system that stays true to Siege and how it feels without ever making the player feel like they were cheated out of a skillful shot, or that they got lucky with a poor show of skill.”

You can try out the new system for yourself on the Rainbow Six: Siege Technical Testing Server as of Sept. 20.