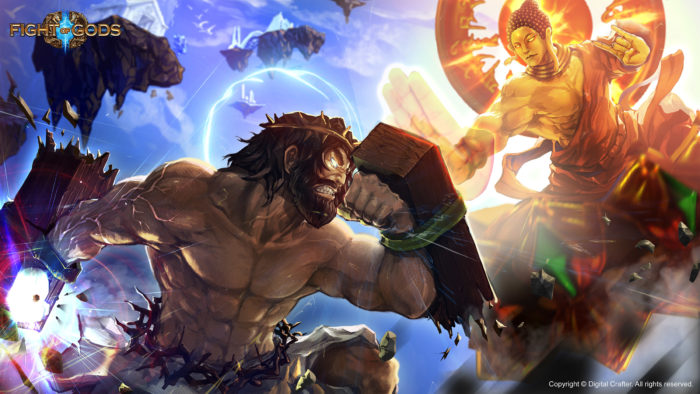 Publisher PQube has announced via their website recently that Fight of Gods, a 2D fighting game from the likes of developer Digital Crafter that lets players pit Jesus against Buddha in a fight of biblical proportions, is now available as a Steam Early Access title. What’s more is that it’s available for 40 percent off for a limited time.

In Fight of Gods, PQube promises that users will get to experience “Jesus and Buddha punch[ing] the holy $*!% out of each other.” Yesterday’s announcement of two new gods joining the roster comes fresh after the news of Zeus and Odin joining the title, too.

In terms of the new fighters themselves, Jesus is shown punching Buddha in the face with the splintered parts of his cross – still nailed to his wrists, of course. Buddha, on the other hand, can slap Jesus into submission. Other fighters, like Moses, also use their unique attributes when in combat, as the aforementioned Old Testament figure uses the 10 Commandments to bash his enemies’ faces in, then drowns them using his “parting the sea” special move.

The additions to the game’s roster don’t stop here. Digital Crafter is inviting fans to help contribute to the title’s cast through Fight of Gods’ Steam page, stating “Poseidon? Ra? Loki? Quetzalcoatl? Cthulu? Korean Jesus? Somebody else? We want to know who gets your vote for the next wave of fighters!”

Many fans are beseeching the developer to add in Allah and Muhammed, though it should go without saying that that could open a huge can of worms. In remains to be seen if that will actually happen, though I wouldn’t get my hopes up.