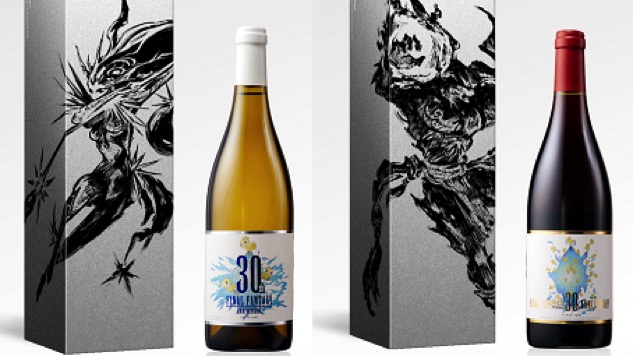 Do you like Final Fantasy? Do you like wine? You can combine the two if you so choose, with special Final Fantasy 30th Anniversary Wine, in two different flavors. You can choose from Ifrit Rouge and Shiva Blanc, red and white wines emblazoned with gorgeous Final Fantasy imagery, pinot noir and chardonnay made in the city of Mâcon in Bourgogne. This is the good stuff, folks.

Square Enix is teaming up with The Wine House in Los Angeles to bring the wines to fruition, with the Ifrit Rouge a red wine named after the fire summon creature from Final Fantasy. Its counterpart Shiva Blanc is essentially the direct opposite, a white wine named after the ice summon Shiva.

Both bottles of wine have a special Final Fantasy 30th Anniversary Logo on them with special artwork to commemorate the occasion. The bottles are currently available for you to preorder right now, though they won’t be shipping until the beginning of November and won’t arrive until the end of the month. This means they’ll make great holiday gifts for some diehard fans, but you may want to just keep them as important keepsakes to mark the occasion, because they may well be worth some money in the future.

There’s a selection of other gifts with which you can celebrate if you’re not interested in sipping a glass of wine, all located at the official Square Enix store. Celebrate however you’re comfortable celebrating, after all!