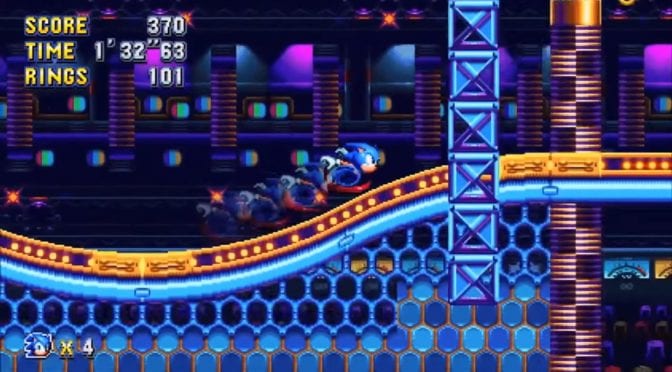 In gaming, phrases such as “a love letter to fans” get thrown around so much that they end up being meaningless. But seriously reader, believe me when I say this: Sonic Mania is a love letter to fans. Christian Whitehead and PagodaWest Games could not have constructed a more perfect tribute to the original Genesis games. The game demonstrates over and over again, just how intimately familiar the development team is with the Genesis games to the benefit of anyone who decides to play Sonic Mania. Hardcore fans will pick up on subtle references and cleverly reused mechanics, while newcomers will be able to enjoy the finest 2D Sonic game ever created.

Note: This review contains minor spoilers including the name of some of the zones in the game. If you don’t want to be spoiled about the names of some zones, don’t read any further.

Sonic Mania is part remaster and part original game. Although the game has more remastered zones than original ones, one of the acts in the returning zones are heavily re-imagined with brand new mechanics. For example, Chemical Plant Zone Act 2 allows players to mix a chemical-like substance into the water to make it varying degrees of bouncy, which sends the character (your choice of Sonic, Sonic & Tails, or Knuckles), flying into the air. Hydrocity Zone Act 1 features a boat that can be used to skip over water sections, provided you can dodge enemy fire and ceiling spears like the ones seen in Labyrinth Zone from the original Sonic the Hedgehog. These additions ensure that Sonic Mania isn’t just a rehash of old content and are actually done very well.

Subtle returning features like those spears are cleverly sprinkled in throughout all of Sonic Mania, and it makes it feel like more than just eight returning zones made it into the game. The final zone of the game features the glowing magnetic orbs from Sonic & Knuckles and Stardust Speedway Act 1 has the pull-rings from Marble Garden Zone Act 2, just to name a few. Whitehead and PagodaWest Games filled every crevice of Sonic Mania with nostalgic references and accomplished this without beating fans over the head with it. If you haven’t played the Genesis games in a while, you might not even notice them, but hardcore fans will pick up on it and smile. 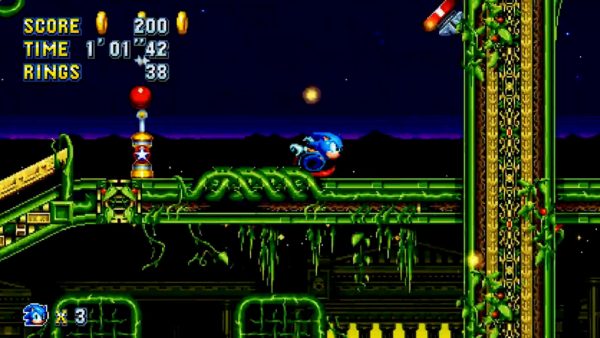 If nothing else, even the worst Sonic games, the soundtrack usually is (and needs to be) on point. Sonic Mania is no different, and raises the already sky high bar on Sonic music. So many of the classic zones are classics because of their music. It’s an equally important part to what makes a good Sonic zone alongside level design, physics, and art. Classic songs return, alongside remixed versions and new original tracks that will meet and exceed fans’ highest expectations.

Ultimately, though, this isn’t the first attempt at a 2D Sonic revival or remastered stages. For Sonic Mania to truly dispel the so-called “Sonic-Cycle” curse, it really needed to deliver a game that felt right. Momentum physics is a hotly debated topic in the Sonic community and fortunately for fans, Whitehead and PagodaWest Games were aware of the simple solution. Just emulate the original games. Sonic Mania thankfully plays exactly like the originals with some new features thrown in such as the Drop Dash. The Drop Dash is a new ability for Sonic that allows him to roll right into a dash from mid-air once he hits the ground. It’s difficult to use effectively, but hardcore speed runners will likely wow us with it once they figure out the best possible routes.

Speaking of routes, Whitehead and PagodaWest Games spared no expense in ensuring Sonic Mania has multiple and creative branching paths in its acts, including paths that make use of each character’s unique traits. Knuckles can glide and climb surfaces, Tails can fly, and Sonic can jump higher, Drop Dash, and make use of the elemental shield’s secondary attacks. While the zones obviously stay the same, you can extract a ton of replay value by just exploring different paths as different characters and find the fastest way to complete an act. Which also, by the way, Sonic Mania includes a Time Attack mode for you to record your best times, a Competition mode, and other hidden extras that we won’t spoil here. Between these additional features, the game’s length (which is similar to S3 & K), hunting for Chaos Emeralds, and the new Medallions from Bonus Stages, there is a lot of content in this $20 package.

If I must nitpick, Sonic Mania is weighted very heavily toward remastered stages other than its own original stages (eight to four). This is a shame because the original stages are memorable in their own right, and can stand among the best in the series, with Press Garden Zone being the most notable. Still, as mentioned before, the remastered acts are remixed so well that they feel like totally new zones in so many ways. If there’s a Sonic Mania 2, I wouldn’t mind seeing an even split of old vs. new, but for this game, it didn’t register as a big negative to me. 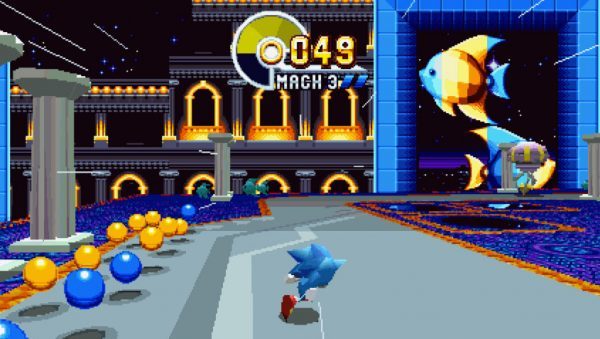 Finally, another small issue I had was with the elemental shields. The promotional videos hyped it to be a really cool new feature, and it is, but in practice it doesn’t really appear all that often. It would have been nice to see them utilized in more creative and unique ways other than the occasional flashiness of lighting certain surfaces on fire.

To borrow a reference from the TV series Community, Sonic Mania is a window into Sonic’s brightest and best timeline. If only this had been the path SEGA chose back when the series was at a crossroads after the Dreamcast games. Imagine how revered Sonic could be at this point. Instead, we got the darkest timeline featuring Sonic the Hedgehog ’06, and the series of embarrassing duds that followed.

Sonic 3 & Knuckles left the 2D series at such a high point, that it would be difficult to find a way to top it. Yet Whitehead and PagodaWest Games, found a way to do it. The game is bursting at the seams full of smart nostalgic references that hardcore fans would pick up on, while also managing to feel like a genuine new entry. Sonic Mania is not only everything fans of the classic Genesis games could have wanted and more, but it’s one of the best 2D platformers of this generation, and of all-time. It has taken awhile, but with Sonic Mania, the series is finally back in the club of truly remarkable and exemplary games.