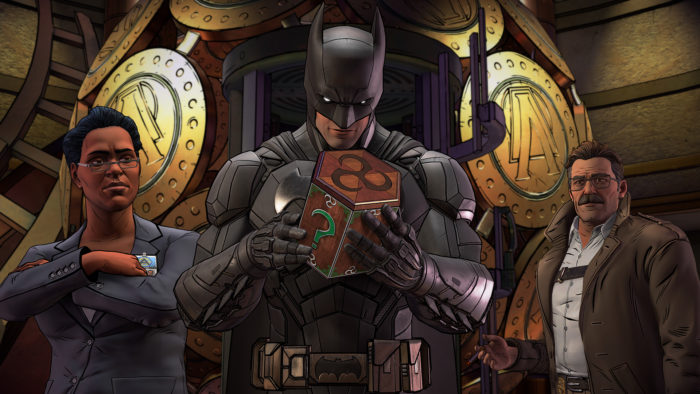 Telltale Games has just announced follow-up seasons to two popular entries in its array of adventure games: Batman: The Telltale Series Season 2 and The Wolf Among Us: A Telltale Games Series. In addition, they’ve also announced The Walking Dead: The Telltale Series – The Final Season, which is a working title covering what will end up being the final installment of the massively popular Walking Dead adventure series.

All this news comes ahead of San Diego Comic Con, which kicks off tomorrow. First on the announcement docket is Batman: The Enemy Within – The Telltale Series, a brand new installment in the Batman: The Telltale Series adventure saga, featuring Episode 1, “The Enigma,” available on August 8 for Xbox One, PlayStation 4, PC, and Mac as well as iOS and Android later this year. It’ll also be available for purchase as a hard copy in October as a season pass with the first episode of the season.

Batman will face off against The Riddler and a deadly series of puzzles while Bruce Wayne once again has to deal with his personal demons and everything else that has culminated in his adventures as Batman so far. Troy Baker will return as Batman and Anthony Ingruber will reprise his role as John Doe, or The Joker if you’re nasty.

In other news, after Telltale Games stated to Eurogamer during an interview that the company wasn’t looking to pick back up on The Wolf Among Us any time soon. That appears to have been a farce, as The Wolf Among Us: A Telltale Games Series is getting another installment that’s yet to receive an official title. It will begin, as Telltale Games states, a “fresh story arc” for familiar characters like Bigby Wolf and Snow White. It also appears that the second season of the game will be a “standalone product,” which means as hinted at in the Eurogamer interview by Job Stauffer, head of creative communications at Telltale Games, the game may very well “leave things an open mystery and let fans decide how it ended.” It’ll be interesting to see what ends up happening with the self-contained narrative in that case. As with the new Batman season, it will be coming to all major platforms as well. It’s supposed to make its debut in 2018.

Finally, The Walking Dead: The Telltale Series – The Final Season (which is a working title at present) is scheduled for a 2018 premiere on all major platforms as well. The final season will place Clementine at the forefront of the season, which may well be the last time players get to see her since this is the final season, after all. There aren’t currently many details about the upcoming season floating around by way of Telltale, but it’s certain we’ll see more about it in the coming months.

It seems Telltale is keeping busy. Maybe they’re also busy on a new Tales From the Borderlands game too?