The ability to transform into a squid and slide around in gooey ink with a satisfying sloshiness while pelting other kids with paint isn’t exactly the first thing that comes to mind when I say “third-person shooter,” but Nintendo makes it work. Splatoon was touted as one of the most refreshing and innovative games when it launched on the Wii U two years ago, and it served as a stellar example of what Nintendo’s best creative minds were capable of. Fast forward to today, and we’re just a few short days away from the official release of Splatoon 2, the highly anticipated follow-up to the fishy shooter game.

For those of you who are well-versed in your Splatoon lore, the sequel is set some years after the events of the first Splatfest. After Callie goes missing, and the cute Zapfish are kidnapped once again by the evil Octarians, Marie decides to enlist the help of an inkling (you) to investigate these disappearances and rescue the little critters. Yes, Splatoon 2 does come with a single-player campaign, and yes, it’s packed with collectibles and little lore notes that help to flesh out its world a bit more. The campaign is also structured similarly to the first game’s, where the player has to travel to different areas and complete various challenge missions before unlocking a boss fight in each one.

Splatoon 2’s single-player portion felt sluggish at times, with its challenge missions being filled with simple objectives that are clearly designed to teach you the game’s most basic mechanics. But while the individual missions felt lacking in design and challenge, the game definitely ups the ante with its stunning boss fights. The bosses of each world are uniquely designed, and they’re all outfitted with a specific theme in mind. The first boss I encountered was a large toaster with dangerous AOE attacks, and the second one was a samurai on a unicycle. These bosses are a breath of fresh air in the otherwise dull single-player campaign, and they all provided a sufficient amount of challenge to keep things from feeling too easy. 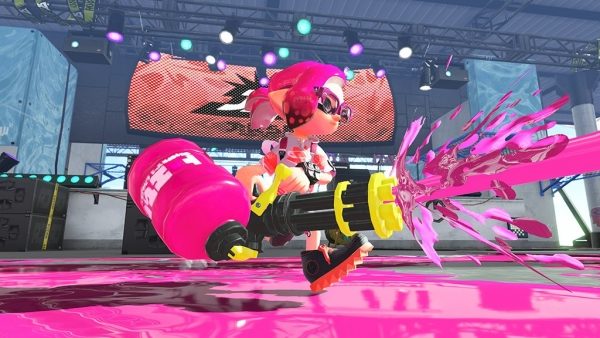 The campaign is serviceable as a tutorial of sorts for newcomers to the series. It also lets players try out the various weapon types, including the brand new Dualies, which are basically dual-wielding pistols with a high rate of fire that give you the ability to perform a dodge roll. The Dualies are a cool addition to Splatoon 2, and it’s one of two new weapon types in the game (the second being the Brellas, which are umbrellas), though they’re not exactly game-changing in any major way. All of these missions are designed to prepare you for the real deal: Splatoon 2’s excellent online multiplayer.

Turf Wars are back, and this regular mode pits two teams of four players against each other as they try to cover the entire map in their own paint color. This is a mainstay of the Splatoon series, and it remains just as fun as ever in the sequel. As you level up through online battles, you’ll gain access to a wider variety of weapons and clothing – all of which serve to round out your preferred build. Every piece of clothing comes with a perk, and aside from just choosing them for fashion purposes, you’ll also need to make sure they actually complement your play style and weapon of choice.

The game also works wonderfully well on the Switch. Though players will lack the Wii U gamepad and second screen this time around, a map can still be pulled up in the middle of a match to check your current Turf War progress, and what areas are still splattered in enemy paint. The game runs smoothly both docked and undocked, making this a fantastic title to take with you on the go if you just can’t get enough of the online multiplayer.

Once you reach level 10, you’ll unlock Ranked Battles, along with three other game modes including Tower Control, Rainmaker, and Splat Zones. None of these are new to seasoned Splatoon veterans, of course, and they’re just as enjoyable as you remember them. However, while Nintendo has promised to provide future updates to the game with new content, it’s more than a little disappointing to see that there weren’t more new modes available at launch.

The one new mode available right now is Salmon Run, an insanely intense and fun horde mode that pits four players against waves of bosses and evil salmon. Players have to collect Golden Eggs, protect them from enemies, and revive each other if anyone goes down. It’s Splatoon 2’s biggest highlight by far, and it’s definitely a shame that this mode is only available during scheduled times, and it’s not a regular mode that you can jump into anytime you’re online. Salmon Run is available in local play at all times, but it’s worth noting that you can’t level up through that method. 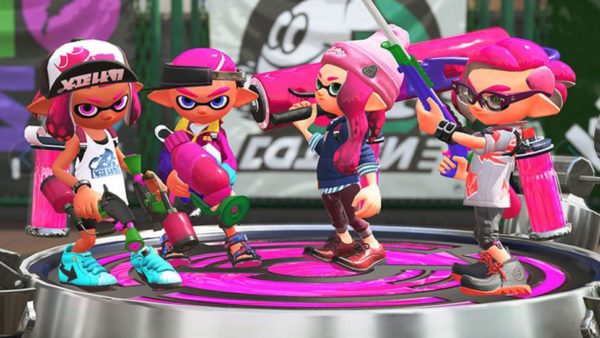 I can see why Nintendo’s opted to make Salmon Run a timed event, just as they’re doing with Splatfest. It makes these modes feel like a novelty or a special event, and it keeps the game feeling fresh, especially when there are so few modes and maps to start with. Though that does beg the question of whether this is simply a band-aid or short-term solution for a much more pressing problem: Splatoon 2’s shortage of new content at launch.

Make no mistake; there are few third-person shooter games out there with as keen a sense of style and charm as Splatoon. The shooting and the inking and the squid-transforming feel fluid and satisfying as ever, and hardcore fans will surely sink countless hours into its solid online multiplayer modes. That said, the new content that is present in Splatoon 2 – the singular new Salmon Run mode, the handful of new maps, special moves, and two new weapon types – are all good additions, but they also feel slight. Perhaps the future updates with new maps and weapons will help to shake things up, but for now, Splatoon 2 feels more like a safe extension of the original rather than a new, fully-fledged game with an identity of its own.

Given how novel and interesting Splatoon felt during the time of its release, I can’t help but view Splatoon 2 as the least innovative sequel to one of the most unique games we’ve seen in years. There’s still plenty of fun to be had here, but just don’t go in expecting anything that drastically refines or improves upon the Splatoon formula.