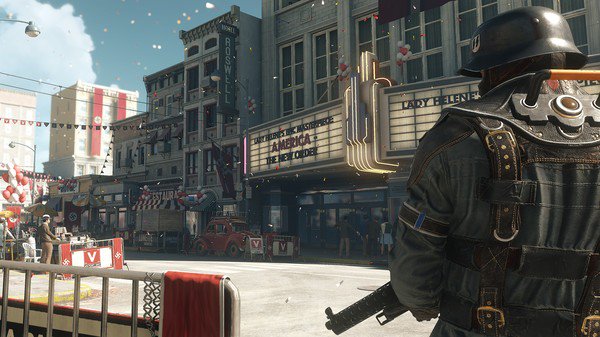 Wolfenstein II: The New Colossus was announced at E3 earlier this month and got us all very excited with its cool looking gameplay trailer which shows an alternative reality where Americans must resist the Nazi’s in an United Stated that’s occupied by the Germans.

The game is currently being developed by MachineGames and, during an interview with Metro GameCentral at E3, MachineGames’ Creative Director Jens Matthies weighed in on the debate as to whether games are art, and it’s clear he knows what he thinks.

“I don’t know, I sometimes think about: is this a meaningful way to be spending my time? But that is the bigger question of is it meaningful to be an artist? And of course, you would be hard pressed to say that art isn’t meaningful. But then, of course, we have this art form that is considered the lowest of the low.

“I consider it [gaming] the highest of the high. Because it encompasses all other art forms. To me, it is the pinnacle art form at this point in time.

“And yes, I think there is meaning in that. At least as much meaning as anything else that humans make. Yeah, there’s a tremendous amount of potential that is yet to be unlocked, within the video game medium.”

The argument of whether games can be considered art has raged for decades and, as technology has improved, games have certainly become more nuanced since the days of Pong. Here’s hoping Wolfenstein II lives up to the high level of quality set by other games that are often considered works of art.

Wolfenstein II: The New Colossus is set to be released later this year on October 27 for the PlayStation 4, Xbox One, and PC.