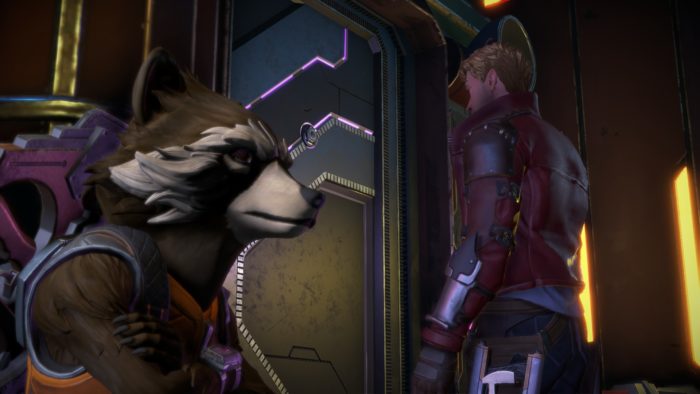 MARVEL’S GUARDIANS OF THE GALAXY: THE TELLTALE SERIES – EPISODE TWO ON PC

Telltale’s premiere episode for its Guardians of the Galaxy series had me conflicted. While I loved the rag-tag adventure feel of the whole thing, with stellar voice acting bringing these beloved characters to life, Telltale’s trademark decision-based gameplay felt empty and inconsequential. Plus, the Guardians – the strongest part of Guardians of the Galaxy – were rarely explored due to the episode’s fast pace. Well, episode two is quite the opposite.

After the cliffhanger ending of episode one, Guardians of the Galaxy’s second episode wastes no time in picking up the action. While our group of heroes is still being hunted down by Hala for the Eternity Forge, all-out chaos never feels that imminent, despite the constantly looming threat. Instead, the group focus their efforts on working out just how the hell the Eternity Forge did what it did at the end of episode one. It provides for a slower pace, as our group zips across the galaxy, bumping into familiar characters and throwing their own concerns and troubled pasts into the open. This led to a rollercoaster of emotions, and particularly tricky decisions (more on those later) that I wasn’t quite prepared for.

This is a good thing, though. Telltale has spent time fleshing out these characters. When Telltale announced the Guardians of the Galaxy series, I hoped it’d make me feel like I was there, on the ship, just sitting in on another mini-adventure with a soundtrack of classics to accompany the laughs. I often found myself once again completely forgetting that these voice actors weren’t the same we’re familiar with from the big screen. Drax’s well-meaning but dumbfounded responses are delivered perfectly, and Nolan North as Rocket stands out as a fantastic fit for the role as the wise-talking raccoon comes under the microscope in episode two. Episode one hadn’t quite ticked that box, but episode two more than makes up for it.

You’ll get the very most out of episode two if you make the most of your time back with the Guardians, though. At the end of a few chapters, you’re given the option to explore the craft, or head straight on to your next destination. I implore that you spend as much time talking to these characters and investigating the bits and bobs around the ship as much as possible. Not only because you can turn the tape deck on and jam out to great hits, but because there are some interesting conversations to be had between characters, and engaging in these only helps to enrich the experience and enforce that sense of family.

When it comes to the fundamental player choice element of any Telltale series, episode two still kind of fumbles. While it delivers the tough choice of standing by a friend or doing the thing that’ll probably benefit the greater good, others felt too much like filler just to tick player choice off the checklist. Sure, you want to keep the rest of the Guardians happy, but if the outcome of my choices regarding relationships is only truly reflected by what an outcome page says at the end of the series, why bother?

Of course, as the Guardians of the Galaxy, the action is never too far away, and despite the larger focus on characters, episode two still provided some of the more enjoyable action QTE moments I’ve had in a Telltale game. Gunning down ships or just beating up bad guys to the soundtrack felt satisfying and engaging.

With episode two, Telltale Games found the perfect storm of ingredients. A healthy dose of character development, a few servings of action to keep things alive, and a generous sprinkling of Guardians of the Galaxy charm to round it all off. While my time with episode two was interrupted by a complete crash, the episode, for the most part, ran smoothly on PC.

Ending on a cliffhanger, I can’t wait to once again jump into Telltale’s Guardians series. While its choices still feel flimsy, I’m enjoying just being on this adventure with the characters, laughing away and tapping my foot to classics like Sparks’ This Town Ain’t Big Enough For Both Of Us.

It may not have you pausing your game and thinking over decisions quite like The Walking Dead did, but Guardians of the Galaxy constantly emanates feel-good vibes, reminiscent of Tales from the Borderlands. While I’m not convinced it’ll ultimately live up to Rhys, Fiona and Loaderbot’s escapades (my own personal favorite series), for sheer enjoyment, it’s shaping up to come mighty close.