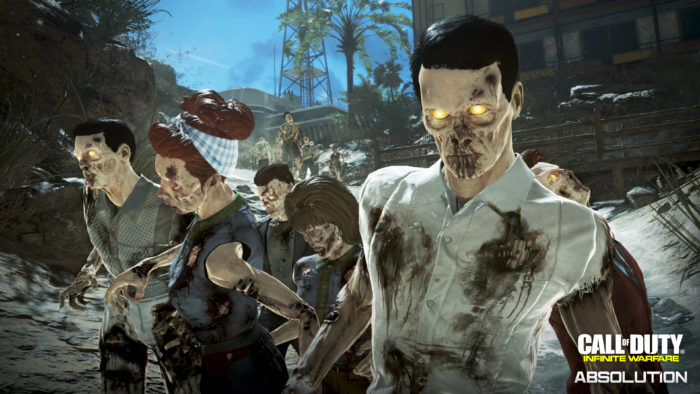 It’s shaping up to be an eventful summer for Call of Duty fans. Activision and Infinity Ward have come forward with details regarding the third map pack for Call of Duty: Infinite Warfare. It’s called the Absolution Map Pack, and it’s bringing four new multiplayer maps as well as a new zombie co-op mode called Attack of the Radioactive Thing!, which is an interesting throwback to pulpy ‘50s horror movies.

The four maps will include Bermuda, Permafrost, Fore, and Ember. Bermuda is a “shantytown” built around a shipwreck, Permafrost takes place within a frozen city with a train station, theater house, and hobo village, Fore features golf courses with magical forests, creamsicles and castle alls, and Ember is a remake of the Modern Warfare 3 map Resistance.

Most interesting is the addition of the Attack of the Radioactive Thing! zombie co-op map, which is meant to continue the Call of Duty Zombies storyline and once again trap players in a movie. Paul Reubens’ Willard Wyler is back once again as the villainous movie director who’s taken four people hostage and is forcing them to fight off zombies in his horror flick set in the ‘50s.

Seth Green, Ike Barinholtz, Jay Pharaoh, and Sasheer Zamata join the cast in addition to the Mistress of the Dark herself, Cassandra Peterson, though you probably know her better as Elvira. Elvira will be your guide throughout the ‘50s monster movie campfest, offering side quests and other helpful features.

The DLC pack is coming first to PlayStation 4 on July 6, and then it’ll be making its way to other platforms soon after. If you’re not too keen on spending the extra cash for Call of Duty: Modern Warfare Remastered and don’t want to spend much time in the special summer event, this is something pretty fun to look forward to, especially considering Elvira’s joining in on the fun.