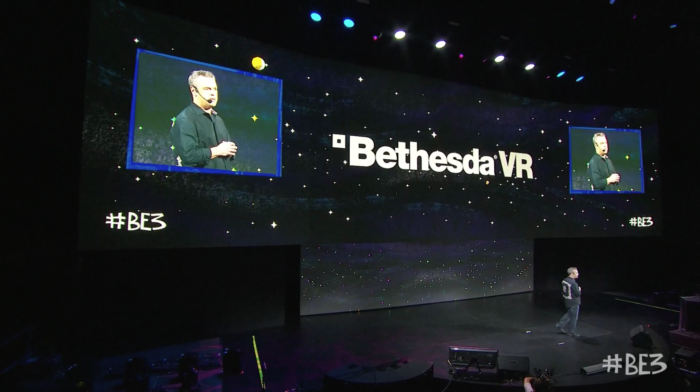 To start off Bethesda’s E3 presentation, virtual reality took center stage as two games released prior to this year’s event got a VR overhaul. This is Bethesda VR, starring Doom VFR and Fallout 4 VR.

First up was Doom VFR, which showed off a slightly different take on the gory game you’ve come to know and love with a much more personal flare. Shoot down familiar monsters from both up close and far away as you can utilize the teleportation feature that comes standard in many VR games. But it seems to no longer be just a shooter, as the player-controlled character solved puzzles as well as explored the world around it while hellions tried to prevent them from doing those two new things. It gives a whole new meaning to facing your demons, especially when you can practically feel the blood splash on you. Missed the trailer? Here you go!

Just like with Doom, we returned to a fan favorite and widely popular game across consoles and PC alike, Fallout 4, which you’ll also be able to play in full VR. Your Pip Boy is quite literally at your fingertips as you turn to look at it in the same what any of your in-game characters would.

Building homesteads also seems to be easier than ever as you are able to bring up the menu and simply point to where you want objects to appear. Directing Dogmeat, donning your power armor, and coming face to face with Deathclaws all brings the dystopia of Fallout a little close to home thanks to the power of VR. But seeing is believing, so here’s the trailer for Fallout 4 VR.

Both games will be playable by the end of 2017, with Fallout 4 VR slated for an October release (although the exact date is currently unknown). Fallout will be compatible with the HTC Vive. Less is known about Doom VFR however, as it’s date was not mentioned or if it, like Fallout, would only be playable with a Vive, or if the Oculus headset would also allow you to mow down your enemies.