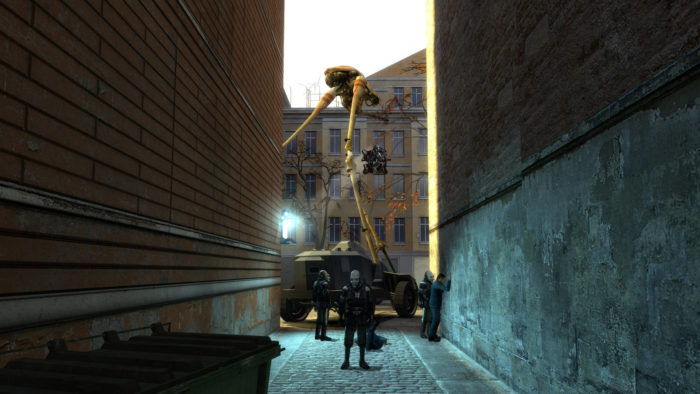 Valve is probably never going to give gamers Half-Life 3, especially considering that all of the Half-Life series writers have now left the studio. No one has to be happy about this situation, but it’s probably best for everyone’s sanity if they just accept it for what it is.

But if that’s not doing it for you, and you’re desperate for any new Half-Life content you can get, then you should probably head over to Steam Greenlight and vote for Half-Life 2 VR. Launched yesterday by a group of modders, the Steam Greenlight campaign seeks to bring a virtual reality version of Valve’s seminal 2004 shooter to Steam.

The modders say Half-Life 2 VR would include motion control support; updated effects, textures, models, and maps; multiple VR movement options; and a 3D VR user interface. After originally being developed and released as HLVR for the Razer Hydra VR headset in 2013 by some of the same modders who worked on this latest iteration, Half-Life 2 VR would be playable on the HTC Vive and Oculus Rift headsets.

“After Half-Life 2 was released [in 2004], [Valve] added a bunch of new features to the engine, like HDR lighting, which were used in the Episodes,” one of the developers, who goes by the handle WormSlayer, told Road to VR of Half-Life VR’s visual upgrades over Valve’s original game. “So I updated all of the levels to use that, and some other features like accurate shadows from static meshes, and also went through and hand-optimised the resolution of the shadow maps everywhere. I fixed countless misaligned textures, little gaps in the level geometry, etc.”

Though the mod would be free, it would require ownership of Half-Life 2 and its episodic DLC releases in order to play. It’s a much more palatable prerequisite than the 2013 version of the mod requires today, which is ownership of a Razer Hydra development kit.