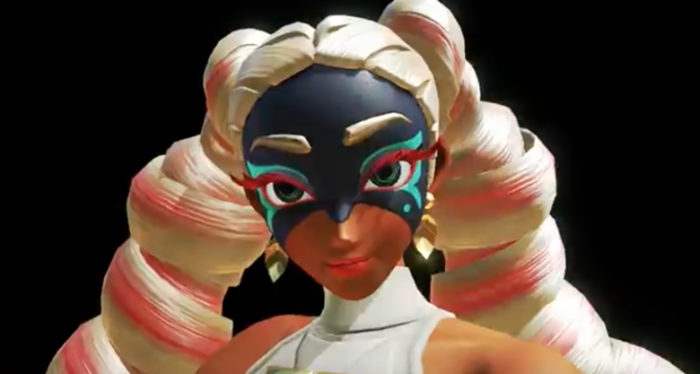 During the Nintendo Direct live-stream today for ARMS, Nintendo has shown off three brand-new fighters for the Switch title.

The first of the bunch to get announced was the speed demon, Kid Kobra. His big boa constricting ARMS will definitely take care of any fighter that gets in his way. He can dodge and dash very quickly to get in some sneak attacks like the tricky snake that he is. His 3 signature arms are the Slamamander, Hydra and the Coolerang. The Slamamander uses wind power to whip opponents into shape. The Hydra launches 3 vertical flaming shots that work great against airborne enemy’s or just tall ones in general. Last but not least, the Coolerang is a freezing boomerang with a wide arc that will slow down any enemy in his path.

The clockwork cops, Byte and Barq will also be joining the roster of ARMS fighters. Patrol Bot Byte works in tandem with his beloved companion, Barq; together they make an unbeatable duo that can perform a special double-team attack. Their signature ARMS are the Seekie, Cracker, and the Bubb. The Seekie fires heat-seeking missiles that will hunt down and electrocute rivals. The Cracker uses firecrackers to pop fighters in the face like it’s the 4 of July. The Bubb inflates when charged and fires straight into your opponent.

This movie star is taking a little bit of a break to compete in ARMS. Twintelle is a A-list star who uses her pigtails as her weapons. Her signature ARMS consist of the Chilla, Parasol, and the Thunderbird. The Chilla will unleash an icy punch so cold that your opponents will think that they’re in a snowstorm. Use her Parasol to unleash stylish yet effective wind damage that also serves as a shield against other ARMS. The Thunderbird is a cute, electric-filled birdy that stop your rivals in their tracks!

Kid Cobra, Byte and Bark, and Twintelle are the last three fighters to be added to the 10 spot roster… as of now. Nintendo has announced that more fighters will be added once the game comes out as free downloadable content.

ARMS comes out on June 16 for the Nintendo Switch. If you missed the Nintendo Direct, you can read all of the info that you might have missed right here.

Excited for ARMS? What do you think about these new fighters? Let us know your thoughts!