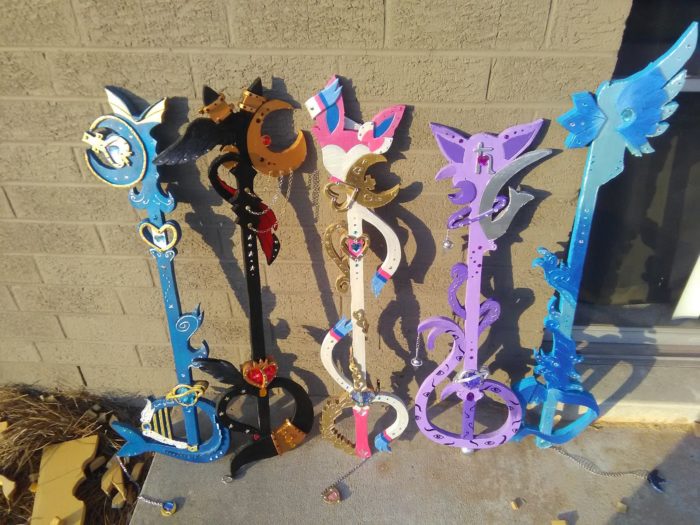 Have you ever wondered what it would be like if Kingdom Hearts, Pokemon and Sailor Moon themes all came together to create one jaw-droppingly gorgeous cosplay prop that seems to be crafted from the deepest part of your wildest dreams? Probably not, but one cosplayer has and the world should thank him for it.

Cosplayer Neverending Dreamz recently showed off his latest string of creations and caused quite a bit of commotion on Facebook when he offered to give one of them away. So what is his latest prop that has more than 5,000 Facebook users and counting hoping they will soon receive one of their very own? Pokemon Keyblades with a dash of Sailor Moon inspiration. Some of his most popular designs include a Sylveon meets Sailor Moon Keyblade and an Umbreon meets Tuxedo Mask Keyblade.

Each Keyblade has been carved out of wood and happily marries elements from all three of the iconic franchises that inspire them. Perhaps the most impressive part about these props, however, is the simple fact that Neverending Dreamz has been freestyling each and every one of them. He admits that he has had many slip ups in the past because he doesn’t actually create a blueprint for any of the designs. Instead, he simply treats a large wooden block like a canvas and starts imagining his next Sailor Moon-esque Pokemon Keyblade as he makes his away across the board. It’s a risky move but certainly one that has paid off for him time and time again. It’s also only fair to remember, however, that he does have quite a bit of experience under his belt. While Neverending Dreamz shared that he only recently got serious about cosplay over the past two years, he still has a total of eight years of experience to tout.

No matter what way you look at it, the idea of meshing Sailor Moon, Pokemon and Kingdom Hearts together was cool enough. Taking that vision and creating a series of unique Keyblades makes Neverending Dreamz a hero of the internet. Now that these creations have garnered so much attention, he plans on making at least one unique Keyblade for every Pokemon generation, creating more Sailor Moon inspired Keyblades and eventually wants to add Naruto Keyblades to the mix as well.