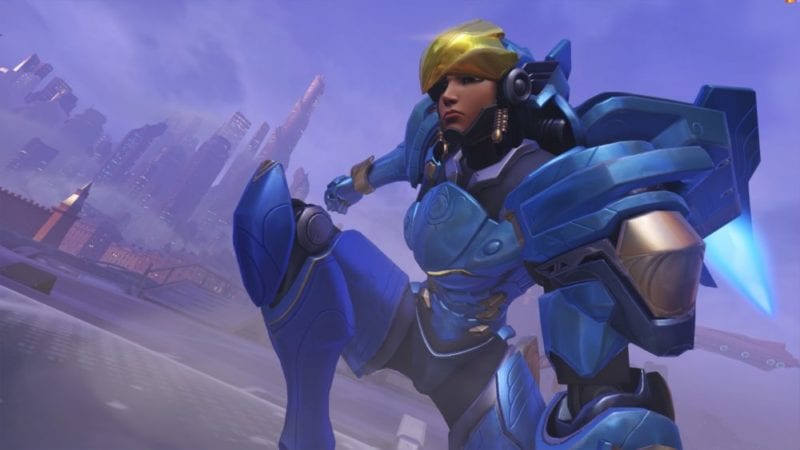 The Overwatch community is one that has remained relatively positive overall but there are certain heroes that can just bring out the worst in people if they are on the enemy team. A Bastion camping in the corner can be pretty frustrating and a Tracer or Sombra harassing your backline will surely have you checking your blood pressure by the end of the match. But even with these heroes, there is typically a certain skill level that the player needs to have in order to really serve as a true blood boiling problem. A hero like Pharah, however, is a different story. Flying around in the air and firing rockets down at the enemy team is an easy task and, to be honest, you don’t have to have great accuracy to present a problem for a team that refuses to work together. Poor team communication is far from uncommon in the world of Overwatch so often times an enemy Pharah gets to fly around unchecked and undisturbed simply because, well, she can fly for a limited amount of time.

When she hits the ground, however, that Pharah is at the whim of a very irritated squad of heroes who are ready to put her out of commission. But imagine if Pharah never had to land. Imagine if she never had to watch her fuel gauge and alternate between a slight hover and an actual rocket jump. Imagine if the skies were all hers and she never had to come down. Imagine how annoying and frustrating she would be. Well, apparently, that idea is not out of the question.

In a recent interview with PC Gamer, Overwatch lead designer Geoff Goodman revealed that he’s still interested in the idea of a character that can truly fly…without ever coming down. Ever.

“Pharah was one of our first heroes, but I remember when we implemented her I was immediately thinking of a hero that flies 100% of the time and never needs to touch the ground—that might be interesting to try some day,” Goodman explained after being asked about mechanics the team still wanted to try out for future characters. Of course, if this type of hero was ever added to the game the team would surely take their time to make the hero balanced but that doesn’t eliminate just how frustrating that could be. Not every hero has a kit that will even allow for significant damage at long range and if a flying hero also has a pocket Mercy, you might be in for one hellish match.

As for other mechanics the team is interested in exploring, Goodman also expressed his desire to experiment with a hero that may be able to shoot through walls or create new items that their teammates could use. “We’ve had a few experiments where we had abilities or guns that could pierce walls…what if a hero could just blast a hole through a wall? Or somehow create objects for players to run on or stand on,” Goodman continued. “The possibilities are endless!”

It will likely be quite some time before we see those kinds of new mechanics introduced, however, because Overwatch developers reiterated that they don’t want to have the game overflowing with too many heroes. For now, the team doesn’t want to release more than three to four heroes every year.