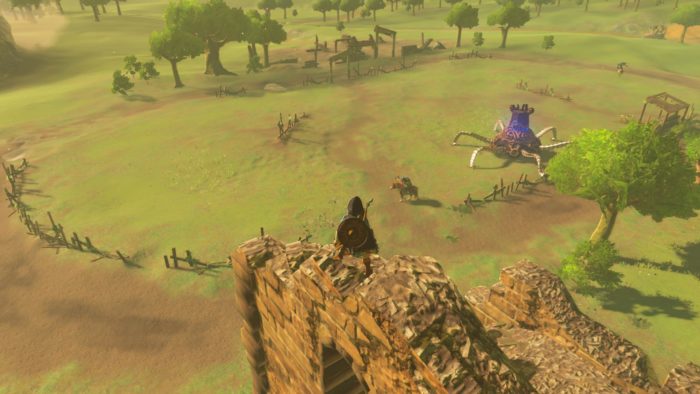 The Legend of Zelda timeline is infamously ridiculous, officially splitting into three separate timelines and spurring no shortage of lively debate and even wild speculation on the part of fans for decades. Part of the controversy is that Nintendo had no plan for establishing any sort of connective tissue when it was developing and releasing the series’ earliest games, and the latest entry, The Legend of Zelda: Breath of the Wild, has an ambiguous place in the timeline, at best.

Series fans, however, have noticed that Breath of the Wild has a variety of references to specific people and places from past Zelda games. Although some of these locations are obvious references that are named directly after characters from previous games (Tingel Island, Mido Swamp, Ruto Lake, etc.) others are less obvious. But fans have suspected for some time that a Breath of the Wild location named simply “Ranch Ruins” is actually the remains of Ocarina of Time’s Lon Lon Ranch — and Nintendo may have confirmed as much yesterday.

“Does this location make you feel nostalgic for anywhere?” Nintendo of America captioned the above image on its official Facebook page. While Nintendo still hasn’t outright confirmed that Ranch Ruins and Lon Lon Ranch are one and the same, it appears this is the company’s somewhat subtle way of admitting as much.

Lon Lon Ranch is an important location in Ocarina of Time, as players have to visit it to learn a key song for Link’s Ocarina, gain access to his horse Epona, and get a bottle for item storage. In Breath of the Wild, Hyrule has been torn asunder by the evil Calamity Ganon, leaving the world in an almost post-apocalyptic state. The Ranch Ruins are located southeast of Hyrule Castle in Breath of the Wild, which is exactly where they are in Ocarina of Time.

Anyone who played Ocarina of Time will remember racing ranch hand — and temporary owner — Ingo around the ranch’s wooden fence to win the horse Epona, necessary for completing that game’s main quest. In Breth of the Wild’s Ranch Ruins, you can see the dilapidated remains of that fence as well as what’s left of the sign at Lon Lon’s entrance.