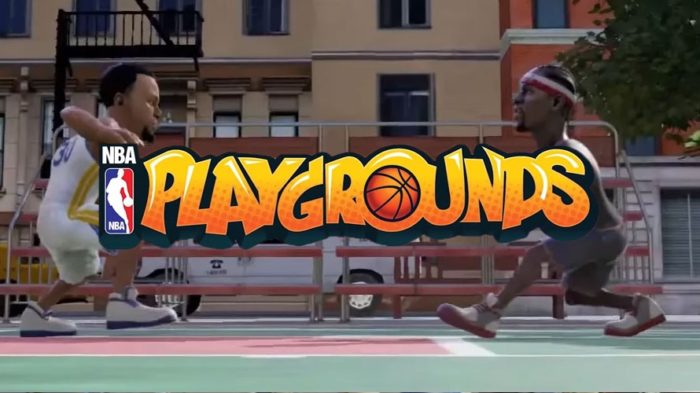 The last NBA Jam game released on Nintendo Wii in fall 2010 and NBA Street Homecourt came to PlayStation 3 and Xbox 360 in 2007. Other than 2012’s underwhelming FIFA Street reboot, we haven’t seen much in the arcade sports game genre in the last few years, but thankfully, NBA Playgrounds does a lot to scratch that itch.

It is a very simple game that focuses on the over-the-top style and easy to learn gameplay that made the Jam and Street games so popular. Matches are two-vs-two and you create your pairing by playing matches, leveling up, and opening packs containing players. With your team, you take part in tournaments set in cities around the world, such as Las Vegas, London, and Tokyo, each with surroundings themed on the city. Matches in Paris take place in front of the Eiffel Tower and the Vegas court is bathed in neon light. While the gameplay doesn’t differ from place to place, playing in each court does feel unique.

The style also matches the arcade-y, over-the-top tone of the game. The settings are cartoony and every player is a caricatured version of themselves with large nodding-dog style heads and kits reminiscent of the time they played the sport. The shorts on the legend players are considerably shorter than those on the current players and every character looks unique.

Controlling your team on the court is very easy. There are options to perform alley-oops and spectacular dunks with a combination of buttons but you can win matches using little more than the shoot and steal buttons. Movement is fast, players move naturally, and sinking shots is relatively easy. From anywhere on the court, time your shots correctly and you’ll be racking up the points with no problem. However, success in actions like stealing and blocking feels completely down to luck. The computer controlled ballers are more than competent – being able to perform crazy dunks and alley-oops I have no idea how to pull off. That also makes them difficult to dispossess. You can press the steal button at what you think is the right time but the opponent will still ghost past you and another time you’ll press it hopefully, not expecting anything, and it’ll work. The same can be said of shooting, since success is all down to timing, yet it is seemingly impossible to tell what the game considers to be perfect timing. Different shot types, whether they be 2-point jumpers or wildly optimistic dunks seem to have different perfect release times so it is really difficult to work out each time you shoot. This leads to you choosing one type of shot you know the perfect release timing for and sticking to it because you know you’ll probably score. The pace of the game also makes it difficult to work that out from the player movements. You could say that NBA Playgrounds works with the ‘easy to learn, tough to master’ cliche but mastering the gameplay seems far more down to lucky timing than it does skill.

Gameplay depth comes from a power-up system called Lottery Picks. As you successfully steal from the opposing team, score points, or perform spectacular alley-oops, the Lottery Pick bar will fill up. Once it is full, a power up that can range from shots being guaranteed to go in the basket to 30 seconds of doubled 3-point shots, is triggered. They’re fun to use and can get you back in a contest but they are also NBA Playgrounds’ main source of frustration. As you win tournaments you unlock new Lottery Picks that are added to those that can be chosen when you fill up the bar. As the name suggests, one is then picked at random and the power-up is triggered. However, some power-ups are far more useful than others and being on the wrong end of luck can put you at a real disadvantage.

For example, one power-up increases your movement speed for 45 seconds and another multiplies your shot score by two if you score from a specific tiny section of the court, times three for the next, and so on. One of those power ups can see you storm into a 20 point lead while the other is pretty useless. Movement speed is already pretty quick and sprinting doesn’t use much stamina so increasing it further doesn’t give you much of an advantage aside from beating the shot clock slightly earlier. However, the latter power-up can see you score a dozen points for a single shot, putting you well ahead of the competition. Seeing the other team get that power up can doom you to defeat, especially since the computer is often quite tough anyway. None of the Lottery Picks feel balanced and the difference between winning and losing can often hinge on which lottery pick you or your opponent get.

Like the gameplay, NBA Playgrounds’ progression system is also wonderfully simple yet compelling. You are awarded with XP for playing matches (more for winning) and you level up – unlocking a new player pack each time. Each pack contains five random players, some of which you may already have, and there are more than 150 to collect. There are ‘Epic’ players and ‘Legends’ with better stats that can be used to form even better pairings. The reward for winning tournaments is a gold pack that increases your chance of getting a legend to improve and build your roster. Collecting the players works just as collecting cards does. You get packs and keep your fingers crossed for the ones you need, getting as many packs as you can to finish the collection. There is little in terms of a reward but the collectible aspect of NBA Playgrounds does keep you playing.

Aside from the ridiculous but not entirely surprising fact that online multiplayer isn’t functional on Switch at launch, NBA Playgrounds’ online offering is quite lackluster. The two-vs-two gameplay carries over from the single-player tournaments but you can only play against one friend at a time. There is no way of controlling one baller each for four player matches as there is offline, there aren’t tournaments as of yet, and you should expect to wait a while to find a game of any type. Showing off your skills against other players is undoubtedly fun but it would have been great if there were more options than just 2-on-2 play.

NBA Playgrounds scratches that arcade basketball itch we’ve had since NBA Jam. The gameplay and progression are simple and fun to mess around with but unbalanced power-ups and a shallow online multiplayer offering keep it from being as consistently fun as the classics.