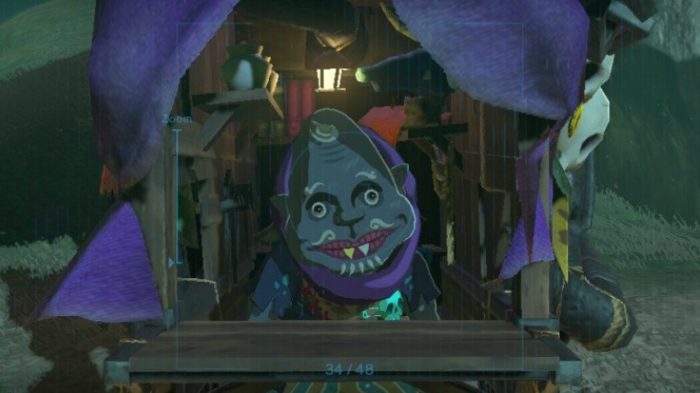 Some users on Reddit are on a noble quest to find the ugliest NPC they can in The Legend of Zelda: Breath of the Wild, and it seems the game is giving them plenty to choose from.

First up is a worthy candidate who looks a lot like she just took a huge whiff of an rather unpleasant-smelling fart. She has hoity-toity written all over her, and looks like she would fit right in with the ugly step-sisters from Cinderella. Pretty ugly, but we can defiantly do better.

Next up is a familiar face to the Zelda series, previously seen in Wind Waker, The Minish Cap, Phantom Hourglass, Spirit Tracks, Skyward Sword, and finally in Breath of the Wild, it’s Beedle!

Beedle’s friendly personality does make up for his looks quite a bit (even if his arrows are over-priced), but that face is really one only a mother could love.

Following Beedle is this striking woman by the name of Seym, who can be found standing outside the Dye Shop in Hateno Village. What really makes this character stand out is that eerie 100-yard stare. She looks like a minion of Calamity Ganon himself, just waiting for the rise of her master.

The rest of her family make it onto this list as well, including her monstrosity of a husband and son.

Following his mother Seym on the ugly list is Sefaro. He can be found in Hateno village either snoozing in his bed in the Dye shop or spying on Purah outside the Ancient Tech Lab. Not only is Sefaro a ugly little bugger, he’s a rude little brat as well. He obviously gets his devilish good looks from his mother, and father who you’ll also find on this list.

For those who ventured into the far corners of Akkala, this monster-obsessed merchant will be familiar.

It’s unclear whether Kilton loves monsters so much he tries to look like one, or if he is part-monster himself, but the thought is bound to pass your mind when you first see his engorged, egg-shape head and frantic, bulging eyes. Either way, Kilton is up there on the ugly-factor while combing the world of Breath of the Wild.

Finally is the pièce de résistance and hand-down ugliest character you’ll come across in Breath of the Wild, the owner of the Hateno dye shop Sayge.

Good lord where to begin. The red comb-over? Prehistoric-esque forehead? Protruding buck teeth under a abnormally red nose? All this qualities and more make Sayge a sight to behold. Combining his physical appearance with his constant desire to stare at Link aggressively as soon as he walks into the shop (or bring out his camera as seen above), allows Sayge to take the cake for ugliest Breath of the Wild NPC, no question.

Who do you think is the ugliest NPC you have come across in Breath of the Wild? Make sure to head over to the Reddit thread and add you two-cents to help fill out the list.