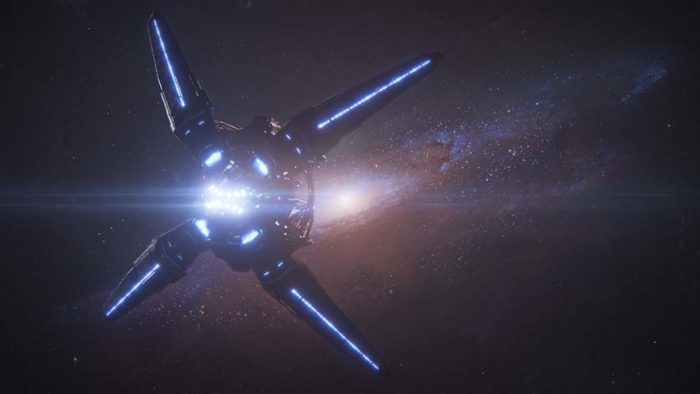 Following the gameplay reveal of Mass Effect: Andromeda at The Game Awards 2016, BioWare is now treating us to some more lore and backstory about the upcoming game’s “Andromeda Initiative”, the project which seeks to establish a permanent presence of Milky-Way species in the Andromeda galaxy.

This is the second briefing video released through the Andromeda Initiative website, this time focusing on the Arks and the Nexus. The former are massive starships exceeding a kilometer in length, which will carry 20,000 colonists in cryogenic sleep each. While their operational crews will be composed of various species, each Ark will be carrying colonists of a given species – Hyperion will be the Ark carrying humans. The Nexus, on the other hand, is a small-scale version of the Citadel, which will serve a similar purpose in Andromeda.

Of course, by purpose, we mean the whole “center of intergalactic politics” thing, not the “secretly a big Mass Relay that allows the Reapers to invade” thing. The Nexus will only be partially built prior to the journey’s beginning, to be completed upon arrival in Andromeda using resources carried by the Arks.

Based on the video, the Nexus will act much like the Citadel in terms of gameplay as well as lore. The amount of in-engine footage shown of the station, including specific locations such as the Vortex lounge, show that players will be able to often return to the Nexus in between missions in order to rest, catch up with the crew, and stock up on supplies and gear.

Fans of the original trilogy will probably recognize the voice of the narrator even before it introduces itself. Avina, the borderline-creepy virtual tour guide who appeared in all three previous Mass Effect games will be making a comeback, further adding to the list of similarities between the Nexus and the Citadel.

Mass Effect: Andromeda will launch on PC, PlayStation 4 and Xbox One in April 2017.