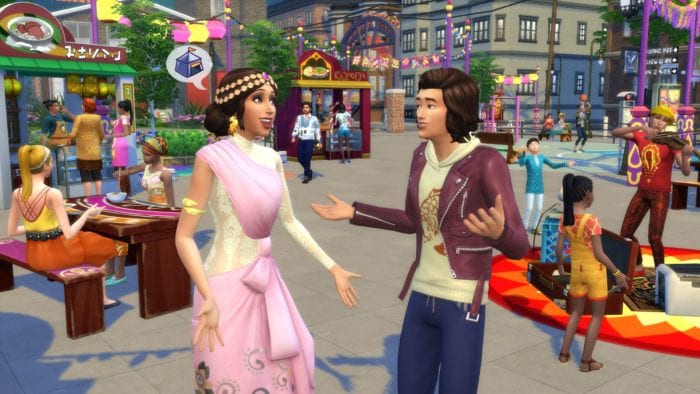 Perhaps the most frequently asked question about any new game or DLC release is related to how long it will take to play through all of said content.

Naturally, things are no different with The Sims 4: City Living, which went on sale last week. The answer, too, is about what you’d hear about most games and DLC: it depends.

When asked on a recent call with reporters how long it would take players to experience the entirety of City Living’s new content, Maxis Producer Grant Rodiek either couldn’t or wouldn’t put a number of hours on the pack, but he noted that it depends heavily on whether or not you play fair.

“You know, I’m really not sure [how long it will take],” he said. “And it depends on how much you cheat. A lot of our players do not play without cheats, and it’s really funny when I’m at press events they’re always asking about cheats, and I sort of made a pact with myself when I started 10 years ago that I don’t use cheats, but it quickly distances me from the way the game is played by some of our players. A lot of players only play with cheats.”

Interestingly, Rodiek says The Sims 4: City Living isn’t really about a linear progression like previous pack Get to Work, but it’s not quite an open sandbox along the lines of the Get Together pack, either.

“In City Living, I think it’s a really great fusion of we have a great foundation for telling stories, and we try to guide you toward those stories a little bit better. They’re not so open as Get Together. They’re more like ‘Hey, here’s a story that you could tell, and here’s the way we push you in the right direction.’

“But we also have very clear, concrete goals that you can work towards. I think it’s a really good hybrid, and I think this is the type of pack that – obviously, if our fans react well to – that I think we’re going to see more of. It’s very much like, ‘Here’s a goal that you can complete. Here’s a story that you can tell.’ And we’re going to wrap all of that to a great, thematic, consistent package.”

Continuing, Rodiek did offer a somewhat vague promise that there is “a lot of game here.” But he also said that Maxis had worked very hard to make sure players get what the studio feels is good value for their money.

“We’re sort of obsessed with making sure they get more value than what they play for, because we want our players to be happy. We want them to be playing the game for a really long time, and when we come up with more expansions, we want them to say, ‘Man, that last one had so much great stuff in it. This next one’s definitely worth my money.’

“We’re definitely not trying to do the quick cash out. It’s definitely something that we’re obsessed with.”

So how does Maxis know when it’s put enough content into a pack to justify it’s asking price? On the surface, that seems like it would be more guesswork than science, especially with no guarantee of how many hours of gameplay are on offer.

Rodiek, however, laid out a number of ways Maxis measures this, including letting external players take the content for a spin, bringing the DLC to community events, asking new players about it, and relying on good old fashioned gut instinct. One thing Maxis avoids, however, is placing emphasis on how much work it was to create the content.

“I think a lot of teams can really mistake ‘This was really hard to make’ for what our players will value it as,” explained Rodiek. “So we try to think about how much gameplay this provides, whether they’re going to be excited for this, whether they have this feature yet, and we sort of put a numeric dollar value against it, and then a couple of us will argue about it.

“And we try to be consistent. We try to refer to my evaluation as the Rodiek Ruble. And my boss, Lyndsay Pearson, hers is the Pearson Peso. And Lyndsay tends to be way overvalued from what I do, so I tend to be a low-baller, so we argue about that.

“But effectively, over time we will say ‘We think this will be the value we’re going to get from this.’ Then we play it and see this is where the value is actually at. Should we go up or down? And then we have additional phases of development where we go back and reassess and look at features and try to really sharpen and refine.”

It’s a lot of different metrics to keep track of, but at the end of the day, Rodiek just hopes that “somewhere in there we align pretty decently on how we’re doing.”