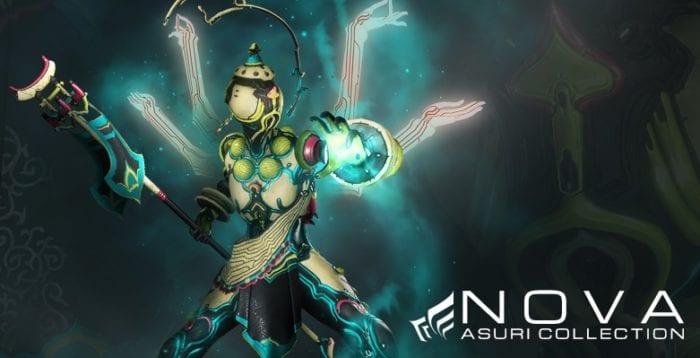 Earlier today, Warframe has received yet another substantial content update.

As one of the most popular free-to-play shooters, it’s been getting a steady supply of additional content ever since its stealthy inclusion to the market, only for it to grow to become one of the consistently most popular games on Steam.

This latest update’s flashiest addition is the brand-new exclusive skin for the nuclear Nova Warframe, which re-imagines her as an Indian deity. The Asuri skin collection presents an even stranger and more alien version of Nova, bundled with a thematic staff skin and a back-mounted Syandana to boot. The latest in the series of various optional recreations of popular Warframes is a rather polarizing, if unique take on this Frame, but is surely going to find its way to hearts of many players.

Aside from Nova Asuri, there’s also an abundance of fixes that should alleviate some of the most pressing issues the game has been suffering from after the haphazard release of Specters of the Rail. The more farm-oriented players will be happy to hear that the in-game Codex now offers precise information on where each Prime Relic can be found, as well as info on where and how each of the mods drop. To make accessing this information easier, some other less important stuff has been moved around, and the entirety of Codex is thus now more streamlined for use.

For a more detailed look at Warframe’s latest update, follow this link, and stay tuned for more information on Warframe’s upcoming massive War Within release, which is due to bring a new fairy-themed Titania Warframe, a huge cinematic quest and more.