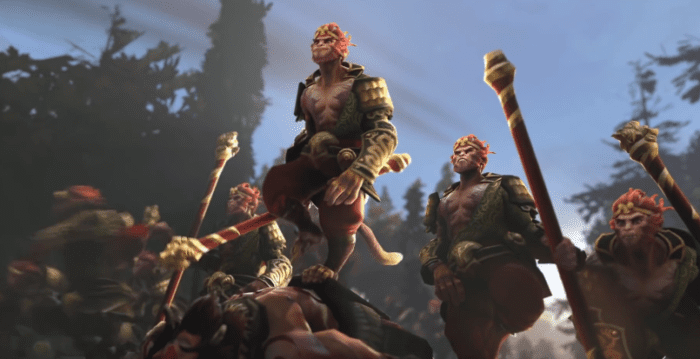 Every year Valve usually throw a new hero in to the mix during the all-star game of The International. There’s been some pretty crazy announcements including the infamous Techies and of course, Underlord, the new re-worked version of Pit Lord that was showcased last night. As expected, he proceeded to demolish all of the competition in the All-Star match. Valve normally limit it to just one hero to make sure that the future meta can adjust, but it seems like that book has been well and truly thrown out the window because they just announced a second hero to be thrown into the mix!

Monkey King has been a part of the DOTA scene since he was a secret quest back in the old Warcraft 3 days, so it’s no surprise that Valve are drawing on him as their latest ‘new’ hero to be added to the roster. He was introduced by a troupe of staff wielding dancers during the main event coverage of The International today and as you would expect, the crowd went wild. It’s clear from the trailer that he’s actually pretty sassy, and uses illusions like nobody’s business. Of course he also wields his trusty Monkey King Bar, a staple item that’s been in the DOTA 2 shop since it’s inception. It’s always nice to put a name to a face, or I guess in this situation, a stun-locking staff…

Looks like Monkey King will be a part of ‘The New Journey Update’ scheduled to release this fall. Let us know what you think about the new guy in the comments!