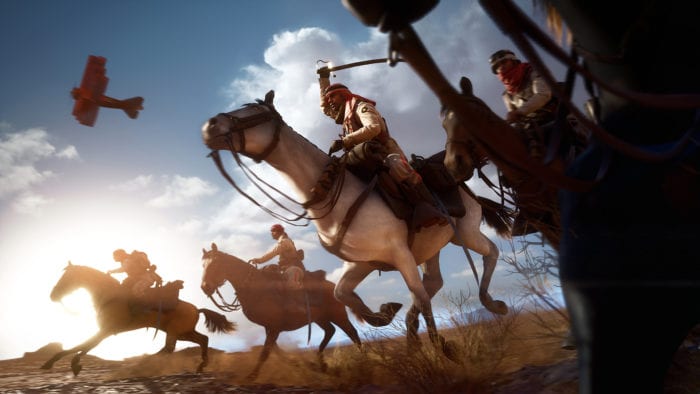 Because Battlefield 1 takes place during World War 1, it will feature different styles of gameplay compared to your traditional Battlefield game. Battlefield 1 will be the first game in the series to introduce horses as a source of transportation, altering the typical tank vehicle mechanics.

In the latest Battlefield 1 trailer, we got a good glimpse at the horses in action. We saw players riding on them as vehicles and using them as a source of weapons (running enemies over). Horses are going to be a big part of the game’s combat system and today, Dice has detailed just how much the horses will change the gameplay in Battlefield 1. Here’s what they said:

“Horses are unique in Battlefield 1. While they might not be as sturdy as tanks, they’re still effective in close-quarters combat. Their speed and agility means they can trample enemies under their powerful hooves, and they’ll get you close enough to slash them down with a saber. If you prefer to stay back a bit, you’ll have access to powerful rifles for medium range combat that can be fired from horseback. ”

“Horses are even effective in anti-vehicle assaults using grenades – you can run circles around the slower mechanized vehicles and harass them with explosives. Horses also have a secondary use as a mobile supply station of sorts, so in addition to these offensive capabilities, players can drop ammo and bandages from the saddlebags to assist team members and help them stay in the fight.”

In related news, Battlefield 1 is getting an open beta later this month. You can find out all the details, including the dates, right here.