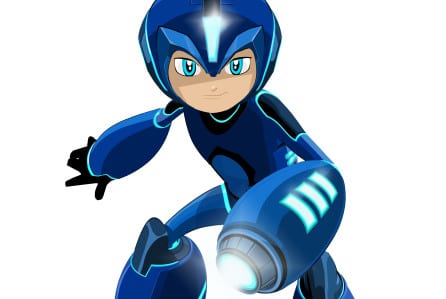 Almost this time last year Dentsu Entertainment announced they were partnering with Man of Action Entertainment—the company behind Ben 10, Generator Rex, and Ultimate Spider-Man—to develop a new Mega Man animated TV series. Details on the project have so far been rather sparse, until today. Dentsu Entertainment has officially entered a partnership with DHX Media to mutually co-produce the Mega Man animated series. As per the deal’s terms, DHX Media and Dentsu Entertainment USA will be in charge of the global rights for the show and will manage licensing and distribution in the United States. Dentsu Inc., Dentsu Entertainment’s parent company, will handle licensing and distribution in Asia. Asaph Fipke, DHX’s Chief Content Officer, had this to say, “We’re very excited to be working with Dentsu on Mega Man. This is yet another deal born of our strategy of teaming up with leading companies on high-profile kids’ brands that we can leverage across our platform of production, distribution, licensing and broadcast. We see this as an excellent opportunity to build on the rich legacy of the Mega Man video game series and introduce the famous boy robot to a whole new generation of kids worldwide.”

More details of the show has also surfaced along with our first look at the Blue Bomber (featured above).  Mega Man the animated series is targeting kids 6 to 9, as well as parents who grew up playing the games. The story follows Mega Man and his new alter-ego, Aki Light, a normal, upbeat, schoolboy robot. When activated, Aki’s skin transforms into nanocore armor complete with goofy helmet and giant arm-cannon. The series promises to introduce new characters, such as one named Mega Mini, as well as bring back fan favorites, like Rush. It’s the classic tale of a robot-boy who becomes a robot-superhero and struggles to maintain his ‘normal’ robot-schoolboy life. Robot.

The Mega Man animated series is aiming for an air date of 2017 in an effort to coincide with the series’ 30th anniversary. The show’s animation style is said to be an “anime-animation” hybrid and based off Mega Man’s new look, it’s safe to say it is heading that way. What do you think of Mega’s new look and the series’ story? Leave a comment and let us know!