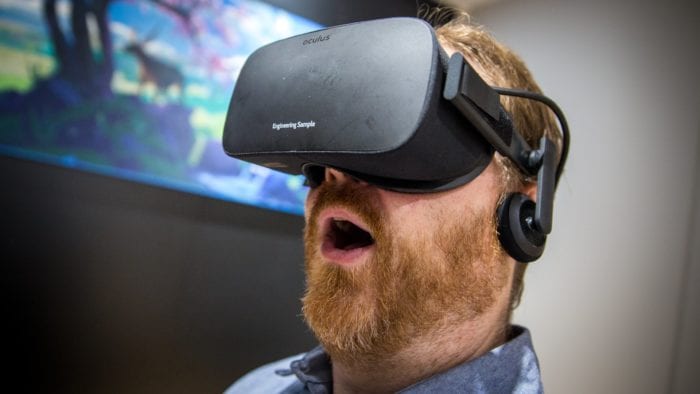 It seems like 2016 is the year the virtual reality future comes to life. Both Oculus Rift and PlayStation VR will launch in 2016, with each company promising huge game libraries. However, Oculus Rift’s creator Palmer Luckey feels that Oculus and Sony aren’t competitors, and each VR headset is aiming for a totally different audience.

In a few recent interviews, Luckey has stated that Oculus is not meant to compete with PlayStation VR. In an interview with International Business Times, he stated that PlayStation VR and Oculus Rift are aimed at different markets with very little overlap.

I think that there’s not many people who already own a PS4 who don’t own a gaming PC who are going to go out and make that roughly $1,500 all-in investment in the Rift. It really is a separate market.

Luckey also pointed out that PlayStation VR couldn’t match the power of Oculus Rift because it’s tied to PlayStation 4. This falls in line with the recently revealed PC specifications needed to use Oculus Rift.

In an interview with The Verge, Luckey also noted that Sony and Oculus are both working to make VR more accepted in the mainstream.

Right now, it’s “all of us together, against the public perception of virtual reality that’s been built up over the decades.”

The response to Oculus Rift’s price seems to show that VR isn’t widely accepted yet, but pre-orders for that same unit did sell out in one day.

Have you chosen between Oculus Rift or PlayStation VR? Or will you pick up both to experience all of the virtual reality games out there? Let us know in the comments.