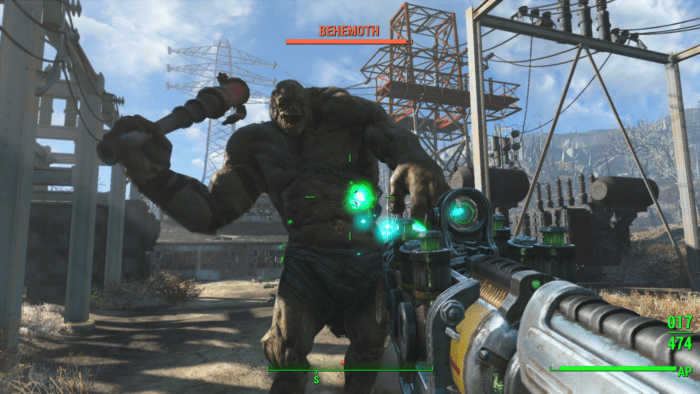 Behemoths are another uncommon enemy type that you will rarely see in Fallout 4, but if you plan on doing everything, you’ll want to know how to take these large brutes down. The first thing you should note is that they are deceptively fast. They will run you down and smash you to bits faster than you can realize what the heck you’re fighting.

They don’t use guns (which is a plus) but they do chuck huge pieces of the earth at you. These do massive damage but are easy to dodge. The melee attacks have quite a bit of range thanks to the Behemoth’s size, and are much harder to avoid if you let them get close. The trick to these guys is pretty much how you’d beat a dragon in Skyrim if you were underleveled.

Find something to run around and keep shooting. As long as there is something between you and the Behemoth, it will continue to chase rather than attack. To shorten the fight, use Molotov Cockatails, a Mini-Gun, Missile Launcher, Flamer, Cryolater, or any other powerful firearm. Behemoths can soak up bullets, so your faster weapons are your best bet. Avoid Radiation because these guys pretty much brush their teeth with the stuff, and the difference between Energy and Ballistic damage never seems noticeable enough to warrant one over the other.

Good luck out there, Wastelanders!