You picked up his skull a little earlier, and now it’s time to face Laurence himself in Bloodborne: The Old Hunters. If you think he looks an awful lot like the Cleric Beast you fought in the base game, it’s because he is almost exactly like the Cleric Beast. He just happens to be on fire and has a few new moves to bring to the table.

When the fight begins, be sure to jump away immediately because Laurence always opens with the same attack: a ground pound that releases flames in an arc. Just like the Cleric Beast, Laurence has a small arm and a larger beast arm. I’ve found that it’s a lot safer to stay on his right side, next to his smaller arm, where it’s a little harder for him to grab you. An ideal strategy to employ here is to keep hacking away at his right side, and stepping away whenever your stamina runs out. However, be sure to roll out of the way whenever you see him lift his large arm. He can grab you and toss you onto the ground, taking away a very large chunk of your health.

Laurence is also similar to the Cleric Beast in that if you get too far away from him, he will leap into the air and land right on top of you. Whenever you see him jump up, be sure to roll forward to get out of his way. If you’re quick enough, you’ll also be able to get a few lucky hits on his back before he turns around again. 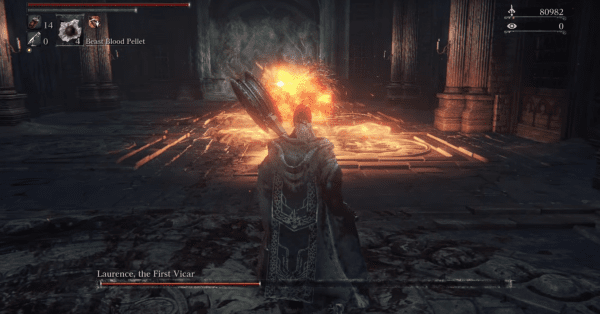 Once you get Laurence down to about 50% of his health, his legs will be hacked off and you’ll enter the second phase of the fight. Laurence might not have his legs during this phase, but that doesn’t make him any less dangerous. He also has a few new attacks you should watch out for. First, he can spew lava out of his mouth. Thankfully, this attack doesn’t have much range so it’s fairly easy to back away from the lava. Whenever you see Laurence tilt his head back, be sure to quickstep away to avoid the lava. You can also rush up to his side and attack as he is completely vulnerable when vomiting lava.

However, you don’t want to get too greedy with your hits. Laurence has a particularly nasty attack where he raises his left arm and does a couple of big swipes in front of him that can deal massive damage. He can also raise his left arm and do a 180 sweep where he completely decimates anything standing at his side of behind him. Once again, if you see him lifting his left arm, cancel your lock-on and just roll away from him.

When you get him down to about a quarter of his health, Laurence will start crawling in a circle around you. This isn’t too hard to handle. As long as you keep sticking to his side and moving away every time he’s ready to swipe at you, you’ll be able to whittle down his health with some safe attacks. Just make sure to keep moving and stay at his side, and you’ll be fine for the most part.