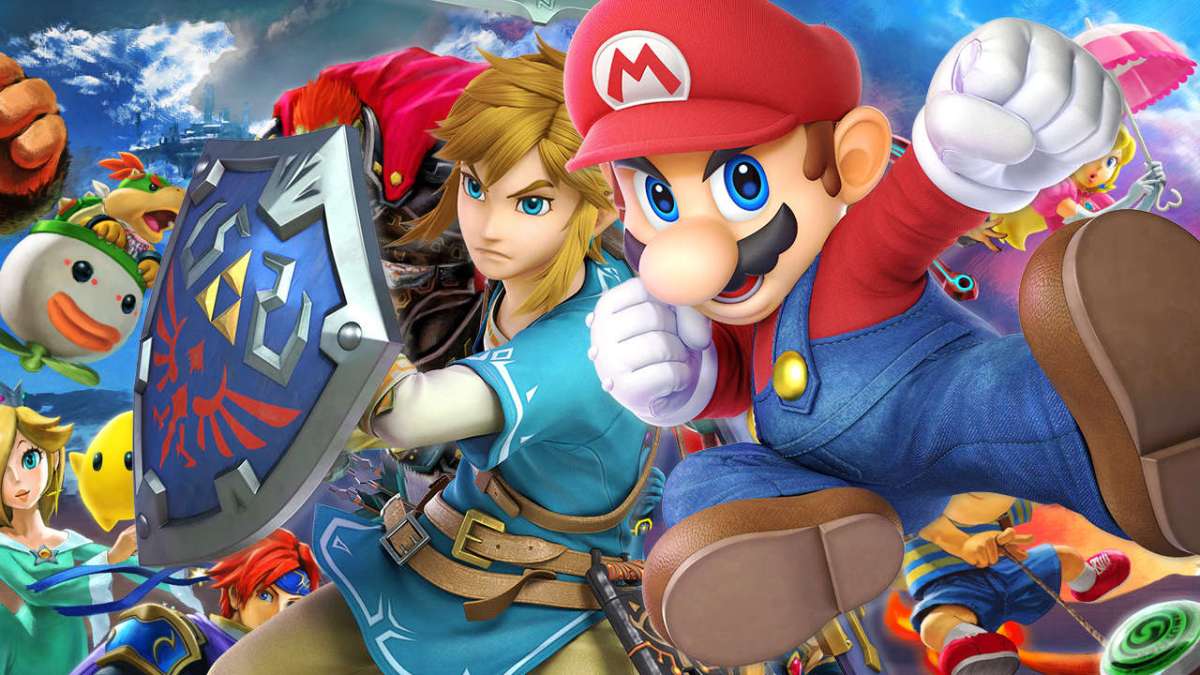 Super Smash Bros. is always one of the top choices for multiplayer games, whether it’s just two of you or a group of eight. You can, of course, just hop right into matches and play for hours on end, or you can dig into the game’s various extra modes, adding in extra rules, taking on various minigames, and much more.

Snipperclips: Cut it Out Together (Switch)

Snipperclips was one of the surprise hits out of the Switch’s release, letting two or four players take control of adorable little paper characters. The goal of the game is to cut up each other’s bodies just right to solve a number of puzzles, whether this involves cutting a cup in to carry something or a specific shape to line up. Snipperclip’s puzzles can be real head-scratchers. But on the bright side, if you get stuck, you can just run around trying to cut each other randomly.

Mario Kart is another great option for a party game, or even just for two players. Even offline you can hop into splitscreen and fill a race with some AI, or just square off against each other. Mario Kart 8 Deluxe comes with tons of different tracks and now features the return of Battle Mode, for even more variety.

Portal 2 is easily one of the best co-op games out there, and it’s an absolute blast to play through with a friend. You and a friend fill the shoes of two test robots, Atlas and P-Body, solving various puzzles to make it to the next stage. Adding two players into the mix completely changes how you approach Portal puzzles, and some can be just as befuddling as the main game.

Keep Talking and Nobody Explodes is an absolutely novel idea that requires at least two players. One player will need to disarm a ticking time bomb, while the other reads them instructions from a manual. Each bomb has multiple modules that function separately from each other, and can be disarmed in any order. Cooperation is essential, and you’ll definitely feel the panic as that timer counts down.

Minecraft has become a world phenomenon and the impact it has had is truly impressive. Of course, it can be just as fun to bring a friend along for the ride. The console and PC version of Minecraft do support splitscreen as long as you’re on at least a 720p TV. Running around the blocky world with a friend is just a blast, as you can imagine.

Rayman had a big comeback with the gorgeous platformer Rayman Origins, but Rayman Legends improves upon nearly everything the first game did. Legends lets two players run around its lush world, jumping and fighting enemies.

Lovers in a Dangerous Spacetime (PS4, Xbox One, PC, Switch)

Lovers in a Dangerous Spacetime is a novel game, and one that can be played with one, two, or four players. You pilot a spaceship that has a variety of stations inside it. Basically each station controls a different function, like the weapons, engine, and shield. All the players will need to jump around to the various stations activating them to fight off enemies and protect your ship. It’s a hectic experience that requires a lot of coordination between the two of you.

Overcooked, much like Lovers in a Dangerous Spacetime, is an incredibly hectic experience, especially with just two players. You’ll each control a chef and have to navigate around a small level to complete orders that come up. Levels throw in obstacles and puzzle elements that you need to work around, and the difficulty ramps up generously as you go on. It’s certainly unique, and one of the best co-op experiences you can have.

The latest game out of EA Originals, A Way Out has an incredibly unique way of using co-op. You play as Vincent and Leo, two men trying to escape prison and then stay on the run. The game is played in splitscreen, but each player goes independently and isn’t just tied to the other players. It’s easily one of the best co-op games in years, and not an experience you’ll soon forget.

Call of Duty: WWII (Xbox One, PS4, No Splitscreen on PC)

Call of Duty has long been a mainstay for splitscreen co-op, and WWII is no different. The beloved zombies mode makes comeback, this time better than ever. Grab a friend and fend off the hordes of zombies that attack. There’s plenty of fun to be had with just that one mode, let alone if you jump into anything else the game has to offer.

Cuphead’s 1930s cartoon aesthetic is absolutely brilliant, and it gives the game a unique flair. It just so happens the game is hard as nails too, so bringing a friend along is pretty much recommended. Two players can jump and shoot through the entirety of the game, making Cuphead a strong candidate for a night of co-op.

The Master Chief Collection is a huge package for two players to work through, presenting not one but four different Halo games to play through. Halo 1-4 can all be played in splitscreen co-op, providing tons of content for you and a friend.

Blizzard’s Diablo series created a veritable genre all on its own, and Diablo III is still one of the best titles you can find out there. While you can hop online with other players, it’s also possible to grab a friend or significant other and create two characters for couch co-op. There’s nothing better to bring you together than killing demons.

The LittleBigPlanet series is where player’s imagination thrive, letting you create levels and content of your own, while also getting the chance to play others. It also just so happens the games are pretty good co-op platformers as well. LittleBigPlanet 3 introduces a handful of animal characters that each function differently, mixing up gameplay. Grab a friend, let your imaginations run wild, and play through some adorable platforming.

Just like The Master Chief Collection, the Borderlands: Handsome Collection provides a ton of content to play through. The collection bundles in Borderlands 2 and Borderlands: The Pre-Sequel, both of which can be played through entirely in co-op. Both games are fairly lengthy RPG shooters with tons of humor .

Gears of War is one of the rare big AAA titles that includes splitscreen co-op across all of its game modes. This means you and a buddy can make your way through the campaign, jump into horde mode to take out waves of enemies, and blast a few bots in multiplayer matches.

Believe it or not, Towerfall actually started out as an Ouya game, but has luckily made its way out from the failed console. It’s a combat arena that sees players squaring off, and eliminating each other with arrows and head stomps until only one player remains. Ascension has also added in a Quest mode, where two players fend off waves of enemies. Towerfall’s tight gameplay makes it a blast to play with even just two players.

Fighting games are always prime candidates for two-player games, if you want to fight each other that is. Injustice 2 among the best with deep mechanics, a fantastic roster, and a surprisingly robust story mode. Two players can jump in with their favorite heroes and square off in some flashy battles, just make sure to learn the controls first.

You can’t talk about the best multiplayer games without talking about Worms, an old classic of local multiplayer. If you don’t know already, Worms is a turn-based tactics game with players using a variety of weapons to blast away the environment from under their opponents, so they’re the last worm left standing. There’s a gleeful joy to blowing up everything around your friends and seeing their worm rocket through the air.

Don’t Starve is one of the more unique titles on here, and it’s certainly not the happy-go-lucky experience some of the other games are. If you and a friend are into procedurally generate roguelikes, however, this one’s a sure fit. Don’t Starve Together is a standalone multiplayer expansion that has two players exploring, collecting items, and crafting to survive.

LEGO games are an instant choice when thinking of two-player games, and nearly every single one features drop in-drop out co-op. LEGO Marvel Heroes 2 is one of the most robust titles in the series, giving you a truckload of different characters to play as. It’s great fun to just roam, or fly, around the city without even seeing the main story through.

While going online with Rocket League is great, you can just as easily grab a friend and play offline. Setting up matches with bots is easy, whether you want to play together or against each other. The best part is that Rocket League features so many diverse modes to play now, from ice hockey to hoops, there’s enough variety to keep two players hooked for a while.

Puyo Puyo Tetris is a combination of two great puzzle games, and all five of the modes included can be played with up to four players. There’s a wide variety to these modes, from standard Versus to a Party Mode, which throws random power-ups into the mix which can help or hinder you.

Resident Evil 5 is an experience entirely crafted around co-op, with an AI partner joining you if you play single player. The title sees Chris Redfield, and his new partner Sheva Alomar, heading to Africa to investigate a new bioterrorism threat. Resident Evil 5 is action-packed and having a reliable friend at your side can help you face down the hordes of enemies sent your way.