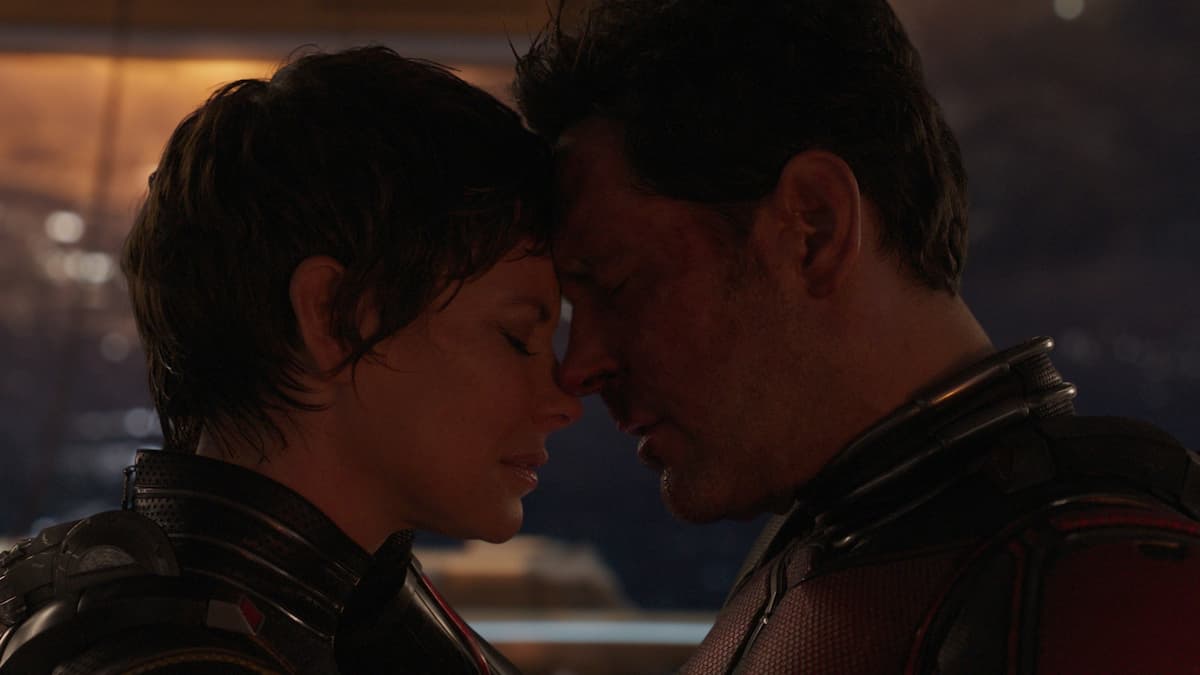 Ant-Man and the Wasp: Quantumania has released its second official trailer, giving MCU fans a better look at one of the film’s villains, Kang the Conqueror. However, he’s not the only character that the trailer focuses on, as there is also a heavy emphasis on the Lang and Pym-van Dyne family, amongst other exciting details. So, without further ado, these are six details you might have missed in the new Ant-Man and the Wasp: Quantumania trailer.

MODOK’s Face Shown in the Background

While the trailer does show a brief yet detailed view of MODOK’s armored form in the film, it also provides a bit of a peek into how he will appear when not in full regalia. Of course, he looks gloriously ridiculous as this is a guy who is roughly 90% just a floating head riding a chair.

The peek at MODOK’s face also seemingly confirms the buzz going around that this won’t be a direct adaptation of the character — with this version having been rumored for a while to be Corey Stoll’s Darren Cross, the main villain of the first Ant-Man movie.

For those who don’t remember when Ant-Man defeated Yellowjacket, the baddy’s body contorted in very unnatural ways before he was sucked into the Quantum Realm. Potentially, the contortions seen there will serve as an explanation as to why MODOK has his big head in the MCU, and given that he now works for the man formerly known as Nathaniel Richards, the chair that he sits on was quite possibly a gift from the Conqueror.

Cassie Lang Has Been in Jail

A brief moment showcased in the Ant-Man and the Wasp sequel’s trailer is Cassie being let out of a jail cell by Scott. While this is a development that happened off-screen thus far, it can be reasonably assumed that the possible Young Avengers member is in jail for doing something against a large corporation, given her father’s history.

Scott began the very first Ant-Man movie by getting out of prison, having served time for stealing money from his previous employer after discovering that they had been embezzling from their customers, to whom he returned the lost funds. So, it is incredibly likely that Cassie is in jail for a similar crime, taking up a bit more after her father than the previous two Ant-Man films showed.

The new trailer for Ant-Man and the Wasp: Quantumania features Janet van Dyne imploring Scott not to trust the duplicitous Mr. Richards and his deal, as she explains just how dangerous the Conqueror is to both time and space.

Unfortunately, the trailer doesn’t detail how exactly the first Wasp knows Kang. However, rumors have circulated that there will be flashbacks in the movie showing a decent amount of Janet’s many years in the Quantum Realm, and how she got in contact with her family in Ant-Man and the Wasp. If these rumors are proven to be accurate, they could explain how Janet and Richards met, perhaps even tying it into the cliffhanger ending of Loki Season One, with Sylvie killing Kang’s variant, He Who Remains.

A big thing that both Ant-Man 3 trailers imply is that the movie’s core five heroes will be spending a decent amount of the film apart, with Scott and Cassie united while Hope, Hank, and Janet operate as a separate unit. This would mean that the groupings in the movie are divided by family lines, with the Langs spending time with Kang while the Pym-van Dynes explore and undoubtedly retrace Janet’s steps in the Quantum Realm.

It’s an exciting yet fitting choice to have these be the groupings on offer, as it really drives home the theme of family. The Langs seem to want to regain the five years they had lost because of Thanos, while the Pym-van Dynes are likely trying to find and stop Scott before he finishes his deal with the devil that is Kang the Conqueror.

An Anthill Made Up of Other Scott Langs

It looks as though part of the deal that Kang is making with Scott requires Ant-Man to go on yet another heist, to steal something from a currently unknown place in the Quantum Realm. Given the Conqueror’s clear desire to retrieve whatever this item is, there’s a good chance it will prove the final piece of the puzzle in getting his army out of the Quantum Realm. The first two Ant-Man films had an obvious influence from heist movies, so to have Nathaniel send Scott on a new caper is a fantastic way to tie all the films in the trilogy together.

As part of the heist in Ant-Man and the Wasp: Quantumania, Scott is able to use alternate versions of himself to form what looks like a giant anthill in order to retrieve the item that Kang desires. Whether or not these are duplicates of the master thief or a bunch of variants of him is unknown as of right now. Nevertheless, it is a striking visual that goes along beautifully with the lead protagonist’s “made-up name,” as Peter Parker would say.

Seeing as how Kang is the main villain of the Multiverse Saga, it is perfectly reasonable to believe that he is connected to a good number of MCU entries. The last saga’s overarching antagonist, Thanos, was linked to many Phase One through Three entries by the Infinity Stones. This new trailer certainly doesn’t put these rumors to rest; indeed fueling them even further, given both Richards’ tech and the tech surrounding the item that he seeks.

While it should come as no surprise that some of the Conqueror’s devices give similar vibes to that of He Who Remains — especially the TemPad shown in the Loki Season One finale — there are other previously showcased items that look strikingly reminiscent. Those that immediately come to mind are the Ten Rings, Ms. Marvel’s bangles, and the Eternals and Celestials’ World Forge. While it could just be a coincidence, it would make a ton of sense if Kang’s tech was influenced by different items throughout the MCU, given that he is a time traveler and all.

Perhaps a lot of his tech abilities are inspired by the Ten Rings and the Celestials, while his time-traveling capabilities result from Ms. Marvel’s bangles, as those were shown to have that ability. It may only be a rumor, but this trailer certainly throws even more fuel onto this fire thanks to the above similarities.