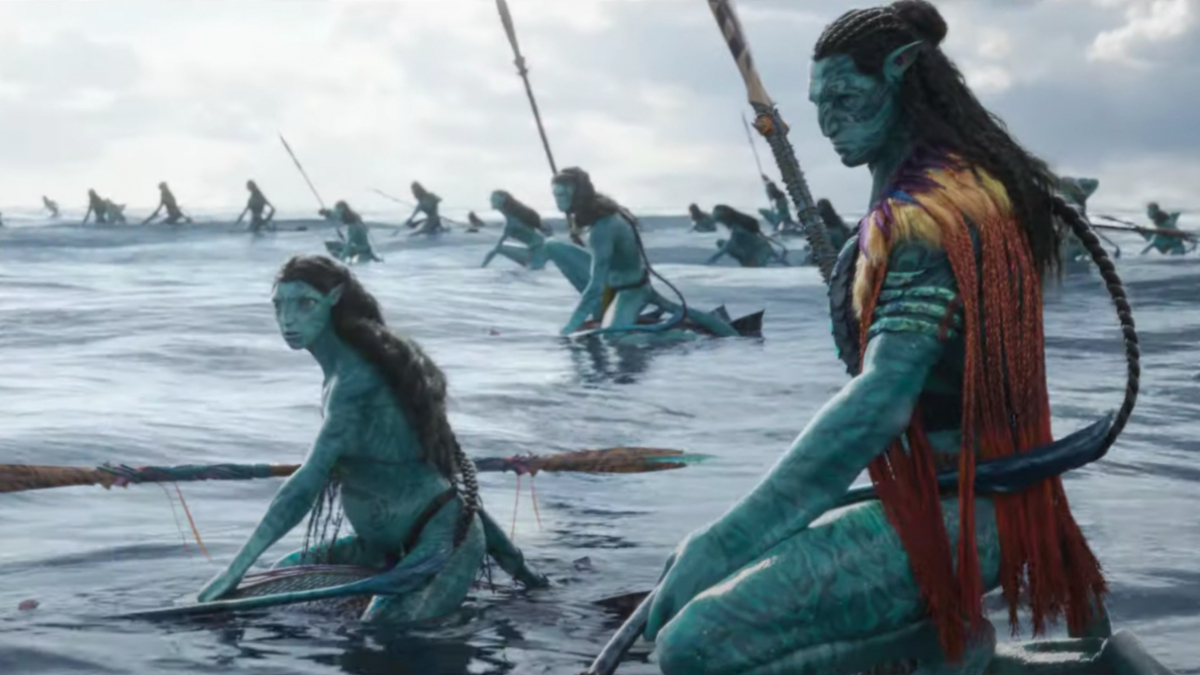 Expectations were high for Avatar: The Way of Water, with most hoping it would deliver a story that hit the right emotional notes after the first one. The film accomplishes this by making the plot about Jake and Neytiri’s family, along with their new connection to the Metkayina tribe during a conflict that requires the Sully family to leave their home.

The movie has great dialogue that depicts how the characters’ minds function and what they were feeling during particular moments. These quotes have a far deeper meaning than it might seem upon hearing them the first time though, so it’s best to take a look at what the words mean and how they fit into the heroes’ characterizations. do be warned though: There are *Major Spoilers Ahead* for the entire film.

“Happiness Can Vanish In A Heartbeat.”

The beginning of Avatar: The Way of Water showed that the happy times for the Na’vi didn’t last as long as they might have appeared at the end of the previous film. Jake narrated that he and Neytiri managed to make a content life for themselves with the arrival of their children, but he and Neytiri were wary of the humans still out there.

This quote summed up what a reality check is supposed to look like, as Jake realized that the years they’d spent in peace were about to be over in a brief moment. The reappearance of humans with even deadlier weapons and malicious intent tore apart Jake and Neytiri’s life, kickstarting the film’s events.

“Wherever We Go, This Family Is Our Fortress.”

While the first film was about Jake finding his place in the universe, the sequel is about maintaining the life he always wanted. Jake’s priority became the safety of his family, whom he saw as the greatest source of his strength since he didn’t have any purpose before them.

Jake assured Neytiri that they would be at their strongest when they were together, even if it meant leaving their lands behind. This gave Neytiri the push she needed to accept Jake’s proposal to head to the Metkayina clan, as she also realized that her family kept her going.

“The Way Of Water Has No Beginning And No End.”

This quote was something like the maxim for the Metkayina that they used to become one with their environment. It was first stated by Tsireya when she trained Lo’ak in the way of the Metkayina, although it came to take on a higher meaning by the climax.

Lo’ak repeated these words to Jake before they nearly drowned, giving the latter the strength to escape with his son as the two finally understood the meaning behind them. It was also a way for the movie to let viewers know that the Na’vi have other abilities that fans need to be on the lookout for.

“Why Am I Different?”

These words are the primary driver behind Kiri’s characterization in Avatar: The Way of Water, with the film taking its time before she actually brings up the question. Prior to that, viewers have the same burning query in their mind when they see Kiri complete feats that even the Metkayina weren’t able to accomplish.

The film decided against revealing Kiri’s true nature, but the point of her role in Avatar: The Way of Water is to stir up enough intrigue for fans to make sure to turn up for the sequel where her abilities will be detailed. Kiri’s question was clearly a long time coming too, since she has no idea who her father is and how Grace’s Avatar could have conceived her.

“Killing, No Matter How Justified, Only Brings More Killing.”

Compared to the previous Avatar characters, Tonowari has a sage personality and wants to avoid any acrimonious situation. Fans would be forgiven for thinking there was something to suspect about him since he was so peace-loving, but this quote provided them with Tonowari’s point of view.

He told the children to stop seeking a fight with Quaritch’s people because taking lives for any cause would still stoke the fire further. Tonowari proves to be right since all the conflict within the film only opens up more to follow, with the death of Neteyam serving as proof.

“Then Let’s Get This Done!”

Jake realized that Quaritch was never going to stop seeking him and his family out by the end of the story, which is when he uttered this quote before engaging in a fight with the villain. Quaritch had made it clear that his defeat at the time was only circumstantial, having intentions to return with more venom.

Jake wasn’t driven by fury at this point as much as it was love for his family, as he knew that he would never be able to live in peace knowing Quaritch could arrive at any point. It was a good way to see how Jake’s character ticked, showing that he would rather die than live in fear.

Lo’ak’s bond with Payakan was a crucial part of his arc in Avatar: The Way of Water, to the point where he was ready to put his life at risk for him. He said these words when Neteyam tried to stop him from going back to save Payakan from the invaders, establishing the depth of his connection with the creature.

Fans also got to see the honorable side of Lo’ak’s personality. He made it clear that he didn’t see Payakan as just a creature and that their bond was indeed genuine. It was the extra bit of compassion that Lo’ak needed to display for fans to understand him better, and Neteyam’s demise means he’ll hold a bigger focus in Avatar 3.

As the youngest child, Tuk had to stick with her siblings wherever she went, which initially appeared to be a source of frustration for her. But as this quote exemplified, Tuk saw it as her duty to be with her kind, claiming that Na’vi stay together no matter what.

Making this more significant is that Tuk was heading back to dealing with Quaritch’s forces at the time, which is a true mark of bravery from the youngster. This also proves that the Na’vi have a code they are meant to abide by and that their children are taught this at a young age.

Neytiri was primarily filled with rage in the movie, as the return of Quaritch destroys the life she’d built with Jake. This leads her into taking more extreme actions, such as when she holds Spider hostage in order to have leverage against Quaritch during their climactic clash.

With the death of Neteyam still as raw as ever, Neytiri promises she will kill Spider to make Quaritch feel the same pain she did when her eldest son died. It went to show how far Neytiri was willing to go considering Spider had been one with the Na’vi ever since he was a child, yet this meant little to Neytiri at that moment.

Essentially the catchphrase of the Na’vi, this quote was used over a dozen times in Avatar: The Way of Water. They use it as a greeting for every person of their kind, like when Jake and Neytiri’s family arrive at the Metkayina clan and make sure they say it to Tonowari.

Saying “I See You” assures the Na’vi that they are of the same people no matter which tribe they belong to, with the effect of these words mostly apparent. Of course, the deeper meaning behind the quote is that of acceptance, with the film showing that all kinds of people can live together if they give each other a chance.