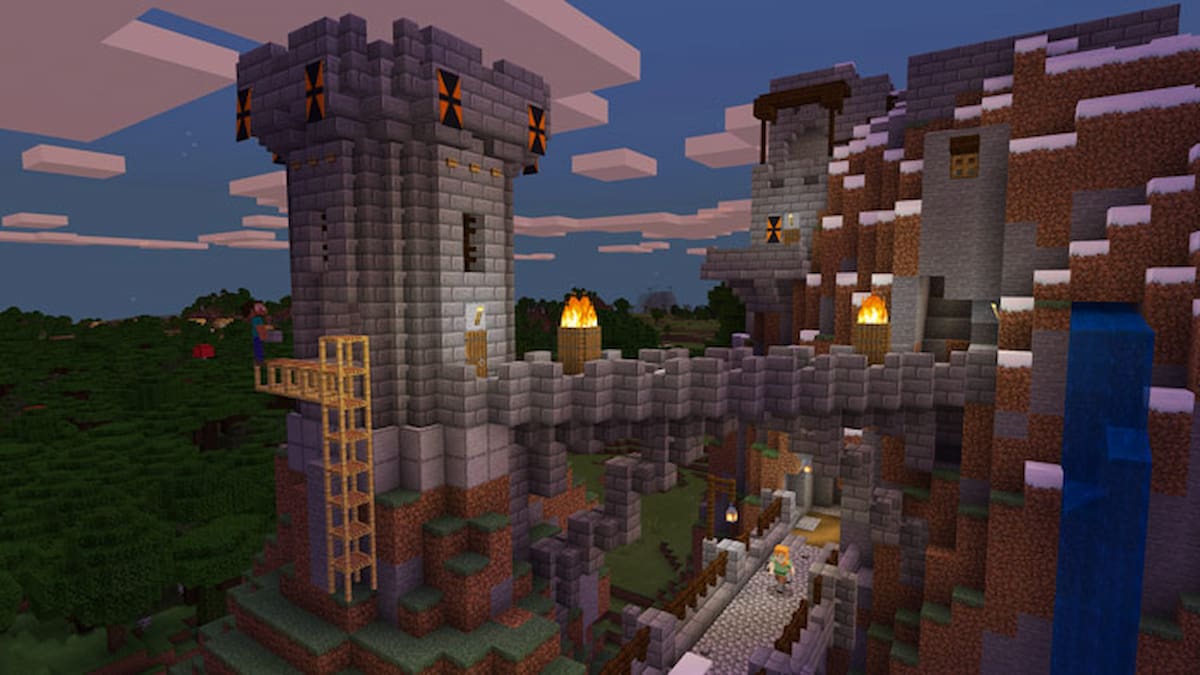 Minecrafters have been building all sorts of structures and works of art inside the popular sandbox game for years. These range from small houses to big buildings, from underground bases to fortresses built high above in the sky. The game lets players create all of that.

Some of the more challenging and rewarding structures that players can build include Minecraft castles. That said, here are some of the best castle designs and ideas you can work on in Minecraft.

Every Minecrafter has to start somewhere, and one of the best projects to start out with is a small castle. It doesn’t have to be grand—yours can be as little as an 11 x 13 structure outfitted with its own armory, stable, smithy, and more. And since it’s small, you can surround it with a moat as wide as you like to keep any pesky mobs at a safe distance.

Finished working on that small castle? Then it’s time to move on to the next project—a traditional medieval castle. After all, nothing speaks “castle” more than the medieval ages, and you can get inspiration from that period in time while creating yours. Build it atop a cliff or mountaintop so that it overlooks villages and other places. Now those raiders will never be able to sneak up on you!

If you fancy something built near water, then you can create a sea fort. Look for a small island near the mainland, then expand it using sand and other materials. Once it gets big enough, you can start building your own fort on it. Don’t forget to create bridges connecting your sea fort to the mainland, otherwise you’re going to have a lot of swimming to do every time you’re done adventuring or ready to start.

Our personal recommendation here would be to forego bridges entirely and try building a secret underground/ underwater passage that leads you back to the mainland. That seems very castle-y if you ask us!

Looking for a bigger castle to build? Try working on a replica of the real-life Kenilworth Castle, a formidable fortress in Warwickshire, UK during medieval times. While the original structure has been destroyed due to wars, many of its ruins are still there.

So what better way than to pay tribute to the decadent castle than by faithfully restoring it to its former glory in Minecraft. The above video shows you a time lapse of a player doing exactly that, and we have to say, this is one of the most impressive Minecraft castles we’ve seen. Think you can do as good, or a better job? Go forth blocky builder!

If you’re looking for something unique and different from the usual castle look, you can opt for a Japanese castle instead. Try building replicas of the black Matsumoto Castle, the crimson Shuri Castle, or the Hirosaki Castle which is surrounded by Sakura trees. There’s a lot to choose from.

Japanese castles have their own distinctive style that’ll look perfect perched atop a mountain, or nestled deep within a jungle biome. Exactly where you dig your foundations is up to you, but those are just our personal preferences.

Want to work on something more surreal? Then challenge yourself to build Cinderella’s Castle—something you see both on the screens and at Walt Disney World’s Magic Kingdom. You can get ideas from the movie, the theme park, or you can watch tutorials instead.

In terms of how you decorate the interior, well, we’ll leave that up to you. Plenty of iconic Mickey Mouse ears seems like a no-brainer to us, though!

There are many iconic structures in video games, and Hyrule Castle is one of them. There are several versions to choose from, but the one from Breath of the Wild is easier to build because you get to see it from all sides in the game. Challenge yourself to build it, and if you’re struggling where to start out, the above video can help with that.

It’s a serious challenge, but the good news is you don’t need a Triforce to build it, no matter how much that blocky Ganon tells you it is.

Fancy a stronghold built into a mountain? Then look no further than Minas Tirith, the capital of Gondor in The Lord of The Rings. This fortified city has several levels and has the citadel and the white Tower of Ecthelion at the top level. Try to recreate the fortress before Sauron’s forces attacked it in the Return of the King.

If “dark” and “gothic” are more up your alley, then Dracula’s Castle might be what your Minecraft world needs. You can take inspiration from so many shows and games that featured this huge, creepy place. And make sure to use materials that will give it its sinister feel—like Obsidian, Nether Bricks, and more.

But what makes this place really shine? Those sinister-looking red windows. They just ooze… ‘I want to suck your blood’ energy, don’t you think?

Duloc might be the perfect place to add to your world. This town, which is ruled by the notorious Farquaad in Shrek 1, could be a fun project with its symmetrical houses and clean pathways. And don’t forget that tall tower Shrek and Donkey see the moment they arrive there.

There are many castles you can build in Minecraft, but we recommend these as they are great for beginners and experienced Minecrafters alike. Some of them are more challenging than others, but since the game doesn’t put limits on your time and what you actually create, you can build these at your own pace.

For more gaming content, news and guides, check out the rest of our content here at Twinfinite. We have a wide range of topics about survival challenges and other creative building challenges in Minecraft.